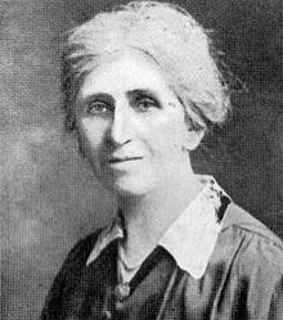 Matilda Cullen Knowles, considered the founder of modern studies of Irish lichens following her work in the early twentieth century on the multi-disciplinary Clare Island Survey, is born on January 31, 1864 in Cullybackey near Ballymena, County Antrim, Northern Ireland. Her work is said to have “formed an important baseline contribution to the cryptogamic botany of Ireland and western oceanic Europe.”

Knowles’ early interest in botany is encouraged by her father, William James Knowles, himself an amateur scientist who takes Matilda and her sister to meetings of the Belfast Naturalists’ Field Club. This is where she first meets Robert Lloyd Praeger who continues to be a lifelong influence. In 1895 she is introduced to the Derry botanist Mary Leebody and together they work on a supplement to Samuel Alexander Stewart‘s and Thomas Hughes Corey‘s 1888 book the Flora of the North-east of Ireland.

Knowles then volunteers to help with the crowdsourcing of material about the plants of County Tyrone. While completing this work Knowles publishes her own first paper about Tyrone’s flowering plants in 1897. She eventually sends in over 500 examples that are considered for inclusion in the Irish Topographical Botany, which Praeger publishes in 1901.

In 1902, after attending the Royal College of Science for Ireland for a year, Knowles is appointed a temporary assistant in the then Botanical Section of the National Science and Art Museum. She works closely with Professor Thomas Johnson to continue the development of the Herbarium collection. She also co-authors with him the Hand List of Irish Flowering Plants and Ferns (1910).

One of Knowles’ first works is The Maritime and Marine Lichens of Howth, which the Royal Dublin Society publishes in 1913. Knowles had gathered the knowledge and experience to do this while diligently assisting with a survey of Clare Island as suggested by Praeger. This novel survey involves not only Irish but also several European scientists including prominent UK lichenologist, Annie Lorrain Smith. This is claimed as the most extensive piece of field work at the time. As a result, Knowles is able to create a foundation for her later specialism in lichens.

Knowles publishes more than thirty scientific papers on a wide range of botanical subjects between 1897 and 1933. It is while studying the lichens of Howth that she discovers how lichens by the shore grow in distinct tidal zones that can be distinguished by their colour: black, orange and grey.

Her major work is The Lichens of Ireland which adds over 100 species of lichen to the Irish List and records the distribution of the eight hundred species identified in Ireland. She achieves this task with the collaboration of thirty other natural scientists. It is published in 1929 and includes twenty lichens that had previously not been identified as Irish.

Professor Thomas Johnson retires in 1923, allowing Knowles to take over curatorship, working with Margaret Buchanan. As she becomes older Knowles’ hearing begins to fail such that she has to rely on an ear trumpet. Despite her deafness she still attends meetings. She cares for and adds to the National Museum Herbarium collection although never gets the credit she deserves. In 1933 she plans to retire but pneumonia ends her life before she ends her career. Knowles dies in Dublin on April 27, 1933.

Knowles is honoured with a commemorative plaque by the Irish National Committee for Science and Engineering in October 2014 to mark the 150th anniversary of her birth.