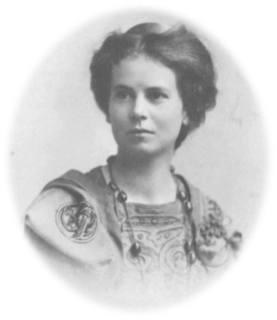 Mary Colum (née Maguire), literary critic and author, is born in Collooney, County Sligo on June 14, 1884, the daughter of Charles Maguire and Catherine Gunning. She is the author of several books, including the autobiographical Life and the Dream (1947), and From These Roots: The Ideas that Have Made Modern Literature (1937), a collection of her criticism.

Maguire’s mother dies in 1895, leaving her to be reared by her grandmother, Catherine, in Ballysadare, County Sligo. She attends boarding school in St. Louis’ Convent in Monaghan, County Monaghan.

Educated at Royal University of Ireland Maguire is founder of the Twilight Literary Society which leads her to meet William Butler Yeats. She regularly attends the Abbey Theatre and is a frequent visitor amongst the salons, readings and debates there. After graduation in 1909 she teaches with Louise Gavan Duffy at St. Ita’s, a companion school to Patrick Pearse‘s St. Enda’s School. She is active with Thomas MacDonagh and others in national and cultural causes and co-founds The Irish Review (1911–14) with David Houston, MacDonagh and others. She, along with her husband, Padraic Colum, whom she marries in July 1912, edit the magazine for some months of its four year run. She is encouraged by Yeats to specialise in French literary criticism and to translate Paul Claudel.

Colum and her husband move to New York City in 1914, living occasionally in London and Paris. In middle age she is encouraged to return to writing, and becomes established as a literary generalist in American journals, including Poetry, Scribner’s Magazine, The Nation, The New Republic, The Freeman, The New York Times Book Review, The Saturday Review of Literature, and the New-York Tribune.

Colum associates with James Joyce in Paris and discourages him from duping enquirers about the origins of the interior monologue in the example of Édouard Dujardin. She accepts Joyce’s very ill daughter, Lucia, for a week in their Paris flat at the height of her “hebephrenic” attack, while herself preparing for an operation in May 1932. She serves as the literary editor of The Forum magazine from 1933–1941 and commences teaching comparative literature with Padraic at Columbia University in 1941.

She rebuts Oliver St. John Gogarty‘s intemperate remarks about Joyce in The Saturday Review of Literature in 1941.

Colum’s publications become increasingly sparse in the 1950s as her arthritis and neuralgia grow more and more severe. She dies in New York City on October 22, 1957. At the time of her death, she is working on Our Friend James Joyce with her husband, each writing various chapters. It is assembled posthumously by Padraic Colum and is published by Doubleday on August 22, 1958.

Colum’s letters are held in Scribner’s Archive, Princeton University Library, while a collection of her papers is held at the State University of New York.