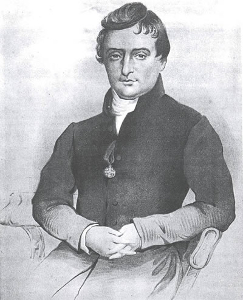 Theobald Mathew, Irish Catholic teetotalist reformer popularly known as Father Mathew and “The Apostle of Temperance,” is born at Thomastown, near Golden, County Tipperary, on October 10, 1790.

Mathew receives his schooling in Kilkenny, then moves for a short time to Maynooth. From 1808 to 1814 he studies in Dublin, where in the latter year he is ordained to the priesthood. Having entered the Capuchin order, after a brief period of service at Kilkenny, he joins the mission in Cork.

The movement with which his name is associated begins on April 10, 1838 with the establishment of the Cork Total Abstinence Society, which in less than nine months enrolls no fewer than 150,000 names. It rapidly spreads to Limerick and elsewhere, and some idea of its popularity may be formed from the fact that at Nenagh 20,000 persons are said to take the pledge in one day, 100,000 at Galway in two days, and 70,000 in Dublin in five days. At its height, just before the Great Famine, his movement enrolls some 3 million people, or more than half of the adult population of Ireland. In 1844 he visits Liverpool, Manchester, and London with almost equal success.

Mathew visits the United States in 1849, returning in 1851. While there, he finds himself at the center of the Abolitionist debate. Many of his hosts are pro-slavery, and want assurances that their influential guest will not stray outside his remit of battling alcohol consumption. But Mathew has signed a petition encouraging the Irish in the U.S. to not partake in slavery in 1841 during Charles Lenox Remond‘s tour of Ireland. Now however, in order to avoid upsetting his slave-owning friends in the U.S., he snubs an invitation to publicly condemn chattel slavery, sacrificing his friendship with that movement. He defends his position by pointing out that there is nothing in the scripture that prohibits slavery. He is condemned by many on the abolitionist side, including the former slave and abolitionist Frederick Douglass who had received the pledge from Mathew in Cork in 1845.

Mathew dies on December 8, 1856 in Queenstown, County Cork, after suffering a stroke. He is buried at St. Joseph’s Cemetery, Cork City, which he had established himself.

Statues of Mathew stand on St. Patrick’s Street, Cork by John Henry Foley (1864), and on O’Connell Street, Dublin by Mary Redmond (1893). There is also a Fr. Mathew Bridge in Limerick City which is named after the temperance reformer when it is rebuilt in 1844-1846.