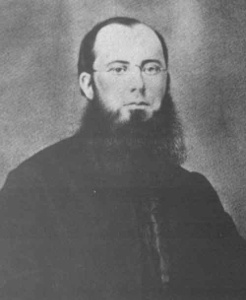 John B. Bannon, Irish Catholic Jesuit priest who serves as a Confederate chaplain during the American Civil War, is born in Roosky, County Roscommon, on December 29, 1829. He is also renowned as an orator.

Bannon is born to James Bannon, a Dublin grain dealer, and Fanny Bannon (née O’Farrell). He goes to the vincentian Castleknock College in Dublin. In 1846 he goes to study for the priesthood at St. Patrick’s College, Maynooth in the minor seminary until 1850 and completing his theology course in 1853. He is ordained on June 16, 1853 by Archbishop Paul Cullen for the Dublin Diocese. He soon applies to move to America.

Shortly after ordination he moves to the Archdiocese of St. Louis, Missouri. He becomes pastor to St. John the Apostle and Evangelist Church which he builds in 1858. He serves in the First Missouri Confederate Brigade, during the American Civil War. He ministers at the battles of Corinth, Fort Gibson, and at Big Black River Bridge, Vicksburg.

He is detained on July 4, 1863 when Vicksburg surrenders. After being released by Union forces he goes to Richmond, Virginia in August 1863, where Jefferson Davis and Secretary of State Judah Benjamin ask him to go to Ireland to discourage recruitment for the Federal forces and try to get international help for the Confederacy.

In November 1863, Bannon returns to Ireland, writing and pamphleting to discourage people from emigrating and joining the Union side of the civil war. He makes two trips to Rome to try, unsuccessfully, to get the Vatican to side with the Confederacy. Following the American Civil War he is banned from preaching in St. Louis, and stays in Ireland, becoming a Jesuit in 1865, spending some time in Milltown Park, Tullabeg College, and in Gardiner Street.

Bannon dies on July 14, 1913 in Upper Gardiner Street, and is buried in the Jesuit plot at Glasnevin Cemetery, Dublin.