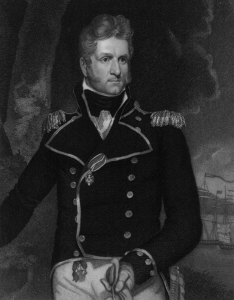 Commodore Thomas Macdonough, American naval officer noted for his roles in the first Barbary War and the War of 1812, whose family is from Dublin, is born on December 31, 1783, in the New Castle County, Delaware town then known as “The Trap,” but now renamed McDonough in his honor.

Before joining the U.S. Navy, Macdonough, for unknown reasons, changes the spelling of his last name from “McDonough” to “Macdonough.” He joins the Navy in 1800 as a midshipman and spends the first years of his naval career fighting pirates, including the famous Barbary pirates operating out of Tripoli. When the War of 1812 breaks out, Macdonough, then a lieutenant, is made the commander of all the Navy’s forces on Lake Champlain, an extremely important post due to the threat of British invasion from Canada. The opposing sides build their fleets on the Lake through most of 1813.

In August of that year, British General Sir George Prévost begins his invasion from Canada. Moving along the western edge of Lake Champlain, he hopes to use the guns of his fleet to help cover his advance. The British army outnumbers the Americans better than two to one, but Prévost needs to use the Lake to supply his army, thus the fleet of Thomas Macdonough becomes a prime target of the British fleet on Lake Champlain.

The two fleets are fairly evenly matched, but the guns of the British ships have an advantage in range. Macdonough comes up with a brilliant plan to negate this advantage. He anchors inside Plattsburgh Bay in such a manner that the British can not fire at them from long range and have to come around Cumberland Head and approach them head on, presenting their bows to the American guns. From there it becomes a close-range slugging match, more to the liking of the Americans.

On board his flagship, the USS Saratoga, Macdonough fires the first shot, hitting the HMS Confiance, the flagship of Captain George Downie, commander of the British fleet. Macdonough continues to work the gun through the fierce 2 ½-hour battle. Twice his men are sure he has been killed as he is knocked out and lay on the deck. But twice he rises and returns to action. Finally, with Captain Downie dead, and their ships devastated, the largest ships of the British fleet strike their colors, and their gunboats run for home.

On land, General Prévost has engaged the American land forces as the British fleet attacks. When it becomes apparent the American fleet is victorious, Prévost knows that further movement south is futile. He breaks off the attack and retreats toward Canada. Thomas Macdonough’s fleet has ended the British invasion. It is one of the greatest victories in the history of the U.S. Navy.

For his enormous contribution to the momentous victory, the United States Congress has a medal struck in Macdonough’s honor, and New York and Vermont present him with huge tracks of land. He continues his Navy career after the war.

On November 10, 1825, Macdonough dies of consumption aboard ship while commanding the USS Constitution as it is passing Gibraltar. His body is returned to the United States and is buried in Middletown, Connecticut. He is laid to rest alongside his wife Ann Shaler, a lady of a prominent family in Middletown, she having died just a few months earlier.