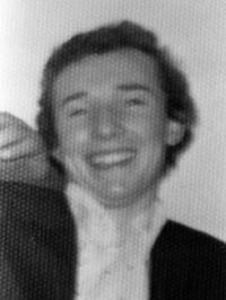 Raymond Peter McCreesh, the seventh in a family of eight children, is born in St. Malachy’s Park, Camlough, on February 25, 1957. He is born into a strong Irish republican family, and is active in the republican movement from the age of sixteen. He attends the local primary school in Camlough, St. Malachy’s, and later attends St. Colman’s College, Newry.

McCreesh first joins Fianna Éireann, the IRA’s youth wing, in 1973, and later that year he progresses to join the Provisional IRA South Armagh Brigade. He works for a short time as steelworker in a predominately Protestant factory in Lisburn. However, as sectarian threats and violence escalate, he switches professions to work as a milk roundsman in his local area of South Armagh, an occupation which greatly increases his knowledge of the surrounding countryside, as well as enables him to observe the movements of British Army patrols in the area.

On June 25, 1976, McCreesh and three other IRA volunteers attempt to ambush a British Army observation post in South Armagh. It lay opposite the Mountain House Inn, on the Newry–Newtonhamilton Road. As the armed, masked and uniformed IRA volunteers approached the observation post, they are spotted by British paratroopers on a hillside. The paratroopers open fire on the volunteers, who scatter. Two of them, McCreesh and Paddy Quinn, take cover in a nearby farmhouse. The paratroopers surround the house and fire a number of shots into the building. After some time, McCreesh and Quinn surrender and are taken to Bessbrook British Army base. Local Catholic priests facilitate their surrender. The third volunteer, Danny McGuinness, takes cover in a disused quarry outhouse but is captured the following day. The fourth member of the unit manages to escape despite being shot in the leg, arm and chest.

On March 2, 1977, McCreesh and Quinn are sentenced to fourteen years in prison for the attempted murder of British soldiers, possession of a rifle and ammunition, and a additional five years for IRA membership. The rifle that McCreesh has in his possession when captured is one of the rifles used in the Kingsmill massacre on January 5, 1976, when ten Protestant civilians are shot dead.

McCreesh is sent to the Maze Prison. He joins the blanket protest and takes part in the 1981 Irish hunger strike. He dies on 21 May, after 61 days on hunger strike.