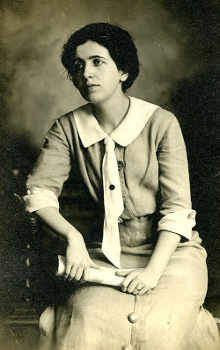 Elizabeth Gurley Flynn, labor leader, activist, and feminist who played a leading role in the Industrial Workers of the World (IWW), is born in Concord, New Hampshire on August 7, 1890. She is a founding member of the American Civil Liberties Union and a visible proponent of women’s rights, birth control, and women’s suffrage.

Flynn’s family moves to New York in 1900, where she is educated in the local public schools. She grows up being regaled by tales of Irish revolutionaries. According to their oral tradition all four of her great-grandfathers, Flynn, Gurley, Conneran, and Ryan, are members of the Society of United Irishmen, with grandfather Flynn being one of the leaders in County Mayo when the French fleet lands there during the Irish Rebellion of 1798. Her parents introduce her to socialism. When she is only fifteen she gives her first public speech, “What Socialism Will Do for Women,” at the Harlem Socialist Club.

In 1907, Flynn becomes a full-time organizer for the Industrial Workers of the World. Over the next few years she organizes campaigns among garment workers in Pennsylvania, silk weavers in New Jersey, restaurant workers in New York, miners in Minnesota, Missoula, Montana, and Spokane, Washington and textile workers in Massachusetts. She is arrested ten times during this period but is never convicted of any criminal activity. It is a plea bargain, on the other hand, that results in her expulsion from the IWW in 1916, along with fellow organizer Joe Ettor.

A founding member of the American Civil Liberties Union (ACLU) in 1920, Flynn plays a leading role in the campaign against the conviction of Nicola Sacco and Bartolomeo Vanzetti. She is particularly concerned with women’s rights, supporting birth control and women’s suffrage. She also criticizes the leadership of trade unions for being male-dominated and not reflecting the needs of women.

Between 1926 and 1936, Flynn lives in southwest Portland, Oregon with birth control activist, suffragette, and Wobbly Marie Equi where she is an active and vocal supporter of the 1934 West Coast Longshoremen’s Strike. In 1936, she joins the Communist Party and writes a feminist column for its journal, the Daily Worker. Two years later, she is elected to the national committee. Her membership in the Party leads to her ouster from the board of the ACLU in 1940.

During World War II, Flynn plays an important role in the campaign for equal economic opportunity and pay for women and the establishment of day care centers for working mothers. In 1942, she runs for the United States Congress at-large in New York and receives 50,000 votes. In July 1948, a dozen leaders of the Communist Party are arrested and accused of violating the Smith Act by advocating the overthrow of the U.S. government by force and violence. After they are convicted in the Foley Square trial they appeal to the Supreme Court, which upholds their conviction in Dennis v. United States.

Flynn launches a campaign for their release but, in June 1951, is herself arrested in the second wave of arrests and prosecuted under the Smith Act. After a nine-month trial, she is found guilty and serves two years in Federal Prison Camp, Alderson near Alderson, West Virginia. She later writes a prison memoir, The Alderson Story: My Life as a Political Prisoner.

After her release from prison, Flynn resumes her activities for leftist and Communist causes. She runs for the New York City Council as a Communist in 1957, garnering a total of 710 votes. She becomes national chairwoman of the Communist Party of the United States in 1961 and makes several visits to the Soviet Union.

Elizabeth Gurley Flynn dies on September 5, 1964, while on one of her visits to the Soviet Union. The Soviet government gives her a state funeral in Red Square with over 25,000 people attending. In accordance with her wishes, her remains are flown to the United States for burial in Chicago‘s German Waldheim Cemetery, near the graves of Eugene Dennis, Bill Haywood, Emma Goldman, and the Haymarket Riot Martyrs.

In 1978, the ACLU posthumously reinstates her membership.