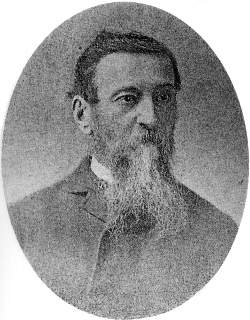 Thomas Clarke Luby, Irish revolutionary, author, journalist and one of the founding members of the Irish Republican Brotherhood, is born in Dublin on January 16, 1822.

Luby is the son of a Church of Ireland clergyman from Templemore, County Tipperary, his mother being a Catholic. He is educated at Trinity College Dublin where he studies law and puts in the necessary number of terms in London and Dublin where he acquires a reputation as a scholar and takes his degree. He goes on to teach at the college for a time.

Luby supports the Repeal Association and contributes to The Nation newspaper. After the breach with Daniel O’Connell he joins the Young Irelanders in the Irish Confederation. He is deeply influenced by James Fintan Lalor at this time. Following the suppression of the Young Irelander Rebellion of 1848, he with Lalor and Philip Gray attempt to revive the fighting in 1849 as members of the secret Irish Democratic Association. This, however, ends in failure.

In 1851 Luby travels to France, where he hopes to join the French Foreign Legion to learn infantry tactics but finds the recruiting temporarily suspended. From France he goes to Australia for a year before returning to Ireland. From the end of 1855 he edits the Tribune newspaper founded by John E. Pigot who had been a member of The Nation group. During this time he remains in touch with the small group of ’49 men including Philip Gray and attempts to start a new revolutionary movement. Luby’s views on social issues grow more conservative after 1848 which he makes clear to James Stephens whom he meets in 1856.

In the autumn of 1857 Owen Considine arrives with a message signed by four Irish exiles in the United States, two of whom are John O’Mahony and Michael Doheny. The message conveys the confidence they have in Stephens and asks him to establish an organisation in Ireland to win national independence. Considine also carries a private letter from O’Mahony to Stephens which is a warning, and which is overlooked by Luby and Stephens at the time. Both believe that there is a strong organisation behind the letter, only later to find it is rather a number of loosely linked groups. On December 23 Stephens dispatches Joseph Denieffe to America with his reply which is disguised as a business letter dated and addressed from Paris. In his reply Stephen’s outlines his conditions and his requirements from the organisation in America.

On March 17, 1858, Denieffe arrives in Dublin with the acceptance of Stephens’s terms by the New York Committee and the eighty pounds. On that very evening the Irish Republican Brotherhood is established in Peter Langan’s timber-yard in Lombard Street.

In mid-1863 Stephens informs his colleagues he wishes to start a newspaper, with financial aid from O’Mahony and the Fenian Brotherhood in America. The offices are established at 12 Parliament Street, almost at the gates of Dublin Castle. The first issue of the Irish People appears on November 28, 1863. The staff of the paper along with Luby are Charles J. Kickham and Denis Dowling Mulcahy as the editorial staff. Jeremiah O’Donovan Rossa and James O’Connor have charge of the business office, with John Haltigan being the printer. John O’Leary is brought from London to take charge in the role of Editor.

On July 15, 1865 American-made plans for a rising in Ireland are discovered. Superintendent Daniel Ryan, head of the G Division of the Dublin Metropolitan Police at Dublin Castle, has an informer within the offices of the Irish People who supplies him with an “action this year” message on its way to the IRB unit in Tipperary. With this information, Ryan raids the offices of the Irish People on Thursday, September 15, followed by the arrests of Luby, O’Leary and O’Donovan Rossa. Kickham is caught after a month on the run. Stephens is also caught with the support of Fenian prison warders. The last number of the paper is dated September 16, 1865.

After his arrest and the suppression of the Irish People, Luby is sentenced to twenty years of penal servitude. He is released in January 1871, but is compelled to remain away from Ireland until the expiration of his sentence.

Upon his release Luby goes first to the Continent and later settles in New York City. He lectures all over the country for years, and writes for a number of Irish newspapers on political topics. At the memorial meeting on the death of John Mitchel, he delivers the principal address in Madison Square Garden.

Thomas Clarke Luby dies at 109½ Oak Street, Jersey City, New Jersey of paralysis, on November 29, 1901 and is buried in a grave shared with his wife in Bayview Cemetery in Jersey City. His epitaph reads: “Thomas Clarke Luby 1822–1901 He devoted his life to love of Ireland and quest of truth.”