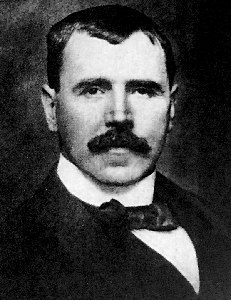 Sir John Lavery, Irish painter best known for his portraits and wartime depictions, is born in Belfast on March 20, 1856.

Lavery attends Haldane Academy in Glasgow in the 1870s and the Académie Julian in Paris in the early 1880s. He returns to Glasgow and is associated with the Glasgow School. In 1888 he is commissioned to paint the state visit of Queen Victoria to the Glasgow International Exhibition of Science, Art and Industry. This launches his career as a society painter and he moves to London soon thereafter. In London he becomes friends with James McNeill Whistler and is clearly influenced by him.

Like William Orpen, Lavery is appointed an official artist in World War I. Ill-health, however, prevents him from travelling to the Western Front. A serious car crash during a Zeppelin bombing raid also keeps him from fulfilling this role as war artist. He remains in Britain and mostly paints boats, aeroplanes, and airships. During the war years he is a close friend of H.H. Asquith‘s family and spends time with them at their Sutton Courtenay Thames-side residence, painting their portraits and idyllic pictures like Summer on the River (Hugh Lane Gallery).

After the war Lavery is knighted and in 1921 he is elected to the Royal Academy of Arts.

During this time, he and his wife, Hazel, are tangentially involved in the Irish War of Independence and the Irish Civil War. They give the use of their London home to the Irish negotiators during the negotiations leading to the Anglo-Irish Treaty. After Michael Collins is assassinated, Lavery paints Michael Collins, Love of Ireland, now in the Hugh Lane Gallery. In 1929, Lavery makes substantial donations of his work to both the Ulster Museum and the Hugh Lane Gallery and in the 1930s he returns to Ireland. He receives honorary degrees from the University of Dublin and Queen’s University Belfast. He is also made a free man of both Dublin and Belfast. A long-standing member of Glasgow Art Club, Lavery exhibits at the club’s annual exhibitions, including its exhibition in 1939 in which his The Lake at Ranelagh is included.

Sir John Lavery dies of natural causes, at the age of 84, in Rossenarra House, Kilmoganny, County Kilkenny on January 10, 1941, and is interred in Putney Vale Cemetery.