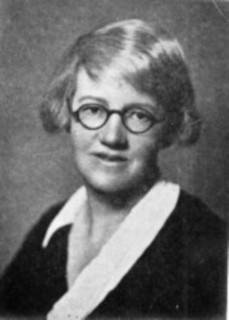 Helen Jane Waddell, Irish poet, translator and playwright, is born in Tokyo, Japan on May 31, 1889.

Waddell is the tenth and youngest child of Hugh Waddell, a Presbyterian minister and missionary who is lecturing in the Imperial University. She spends the first eleven years of her life in Japan before her family returns to Belfast. Her mother dies shortly afterwards, and her father remarries. Hugh Waddell himself dies and leaves his younger children in the care of their stepmother. Following the marriage of her elder sister Meg, she is left at home to care for her stepmother, whose health is deteriorating by this time.

Waddell is educated at Victoria College for Girls and Queen’s University Belfast, where she studies under Professor Gregory Smith, graduating in 1911. She follows her BA with first class honours in English with a master’s degree, and in 1919 enrolls in Somerville College, Oxford, to study for her doctorate. A traveling scholarship from Lady Margaret Hall in 1923 allows her to conduct research in Paris. It is at this time that she meets her life-long friend, Maude Clarke.

Waddell is best known for bringing to light the history of the medieval goliards in her 1927 book The Wandering Scholars, and translating their Latin poetry in the companion volume Medieval Latin Lyrics. A second anthology, More Latin Lyrics, is compiled in the 1940s but not published until after her death. Her other works range widely in subject matter. For example, she also writes plays. Her first play is The Spoiled Buddha, which is performed at the Opera House, Belfast, by the Ulster Literary Society. Her The Abbe Prevost is staged in 1935. Her historical novel Peter Abelard is published in 1933. It is critically well received and becomes a bestseller.

Waddell also writes many articles for the Evening Standard, The Manchester Guardian and The Nation, and does lecturing and broadcasting.

Waddell is the assistant editor of The Nineteenth Century magazine. Among her circle of friends in London, where she is vice-president of the Irish Literary Society, are William Butler Yeats, Virginia Woolf, Rose Macaulay, Max Beerbohm and George William Russell. Her personal and professional friendship with Siegfried Sassoon apparently makes the latter’s wife suspicious. Although she never marries, she has a close relationship with her publisher, Otto Kyllmann of Constable & Company.

Waddell receives honorary degrees from Columbia, Belfast, Durham and St. Andrews and wins the Benson Medal of the Royal Society of Literature.

A serious debilitating neurological disease puts an end to her writing career in 1950. She dies in London on March 5, 1965 and is buried in Magherally churchyard, County Down, Northern Ireland. A prize-winning biography of her by the Benedictine nun Dame Felicitas Corrigan is published in 1986.