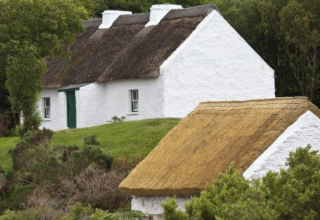 Patrick Pearse arrives in Ros Muc, County Galway on September 13, 1903 and takes up residence at his cottage in Inbhear.

Born in Dublin on November 10, 1879, Pearse joins the Irish Republican Brotherhood (IRB) in September 1913, becoming Director of Military Organisation of the Irish Volunteers in 1914 and is later co-opted into the IRB’s secretive Military Council, which infiltrates the Volunteers for the Easter Rising.

A writer and Irish language enthusiast long before he becomes a revolutionary, Pearse first comes to Ros Muc in 1903 as a 23-year-old handpicked by Conradh na Gaeilge to act as an Irish examiner.

Pearse develops a strong affinity with the area, buying land on Loch Eileabhrach in 1905, upon which he builds a cottage in 1909. Unusually for a professional at the time, he has it thatched in the style of poor country dwellings and on his regular visits between 1903 and 1915, spends time in the cabins of the poor, soaking up the folklore which finds its way into his writings.

Pearse has a rival for the affections of the locals in the shape of the Lord Lieutenant of Ireland, the Queen’s representative in Ireland. William Ward, 2nd Earl of Dudley also spends summers in the area, where he organises hunts with gentry and children’s fetes.

In response, Pearse organises an evening of Irish festivities for Ros Muc. Pearse gives scholarships to local gaeilgeoiri boys to his St. Enda’s School in Dublin.

Pearse’s last visit to the cottage is in 1915, when he composes the rousing oration for the funeral of Jeremiah O’Donovan Rossa. The following April, he goes one step further, declaring a Republic on the steps of the General Post Office (GPO) in Dublin.

After Pearse’s execution on May 3, 1916, his cottage passes to his mother Margaret. In 1921 it is burned down by the “Black and Tans” and Auxiliaries. Restored by Ó Conghaile and then again by Criostóir Mac Aonghusa, by 1943 Pearse’s sisters Senator Margaret Mary Pearse and Mary Brigid Pearse hand the cottage to the State.

Opened in 2016, a new visitor centre next to Pearse’s Cottage provides an introduction to the Irish language, Gaeltacht culture, and Pearse’s connection to Ros Muc.