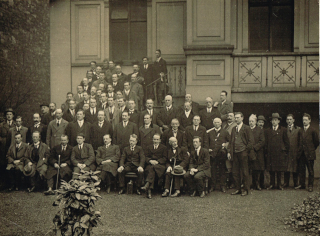 A meeting of the members elected to the House of Commons of Southern Ireland is held at the Mansion House in Dublin on January 14, 1922. At the meeting the Anglo-Irish Treaty is ratified by the Irish side in accordance with the Treaty and a Provisional Government is elected for the purposes of Article 17 of the Treaty.

Under the Irish Republic‘s Dáil Constitution adopted in 1919, Dáil Éireann continues to exist after it has ratified the Anglo-Irish Treaty. In protest at the ratification, Éamon de Valera resigns the presidency of the Dáil then seeks re-election from among its members in order to clarify his mandate, but Arthur Griffith defeats him in the vote and assumes the presidency.

The Provisional Government takes office two days later on January 16, 1922 when British administration hands over Dublin Castle to Collins in person. At this time, Westminster has not formally appointed the new Irish ministers or conferred their government with any powers.

The handover of Dublin Castle to the Provisional Government is one of the earliest and most remarkable events in the short life of the Provisional Government. For centuries Dublin Castle is the symbol, as well as the citadel, of British rule in Ireland. The transfer of its Castle administration to the representatives of the Irish people is greatly welcomed in Dublin. It is regarded as a significant outward and visible sign that British rule is ending.

Following the general election on June 16, 1922, held just before the outbreak of the Irish Civil War, the Second Provisional Government takes power until the creation of the Irish Free State on December 6, 1922.

By mid-1922, Collins in effect lays down his responsibilities as Chairman of the Provisional Government to become Commander-in-Chief of the Irish Army, a formal structured uniformed army that forms around the pro-Treaty Irish Republican Army (IRA). As part of those duties, he travels to his native County Cork. En route home on August 22, 1922, at Béal na Bláth, he is killed in an ambush. Arthur Griffith dies of a cerebral haemorrhage ten days prior to Collins’ assassination. After Collins’ and Griffith’s deaths in August 1922, W. T. Cosgrave becomes both Chairman of the Provisional Government and President of Dáil Éireann, and the distinction between the two posts becomes irrelevant.

(Pictured: The Provisional Government of Ireland with President Arthur Griffith (front row center) and his cabinet and party includng Michael Collins (to Griffith’s right) likely taken at the Mansion House in February 1922)