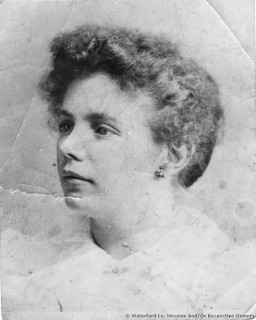 Máire de Paor, Irish historian and archaeologist who also works as a researcher and presenter for national broadcaster RTÉ, is born on May 6, 1925 in Buncrana, County Donegal.

de Paor is born Máire MacDermott to Eamonn MacDermott and Delia MacVeigh. She is educated in the Convent of Mercy in Buncrana before going to University College Dublin, where she completes a master’s degree and a doctorate on early Christian archaeology and metalwork.

de Paor works in the Department of Archeology at UCD from 1946 to 1958. She marries Liam de Paor in 1946 and they have a daughter and four boys. They collaborate on a number of publications. She publishes her papers in the Proceedings of the Royal Irish Academy, Archaeologia, Seanchas Armagh and Comhar. Her husband also works at the university and, as a result of policies about married women, she is forced to leave. Initially she lectures in the United States, Canada, Scandinavia, France and the United Kingdom. She works as lecturer in archaeology at Trinity College, Dublin. The de Paors spend a year in Nepal on a UNESCO project in 1963.

de Paor works as a freelance researcher for Radio Telefís Éireann until she is given a full time position in the 1970s.

de Paor is elected a member of the Royal Irish Academy in 1960 and is a member of the Arts Council from 1973. She becomes a member of Conradh na Gaeilge from 1962. From 1968 she is working with Cumann Merriman, the Irish cultural organisation named after Brian Merriman, working with the group as a director of the schools and spends four years as chairperson. In 1992 she is appointed to the board of Amharclann de hÍde.

University College Dublin has created the Dr. Máire de Paor Award for best PhD thesis. Her biographer identifies her as a committed republican, socialist and feminist.