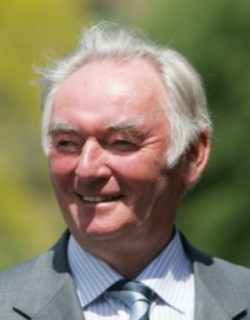 Flynn is the son of Patrick and Anne Flynn. He is educated in St. Gerald’s College, Castlebar and qualifies as a teacher from St. Patrick’s College, Dublin. He first holds political office in 1967, when he becomes a member of Mayo County Council. Ten years later, at the 1977 general election, he is elected to Dáil Éireann as a Fianna Fáil TD for the Mayo West constituency.

Flynn is a supporter of Charles Haughey in the 1979 Fianna Fáil leadership election. His loyalty is rewarded when he becomes a Minister of State at the Department of Transport and Power. He joins the Cabinet for the first time following the February 1982 general election when he is appointed Minister for the Gaeltacht. In October 1982, in a minor reshuffle, he becomes Minister for Trade, Commerce and Tourism. However, his time in this office is brief, since Fianna Fáil loses the November 1982 general election.

Fianna Fáil is returned to power in the 1987 general election and Flynn becomes Minister for the Environment. Two years later he opposes the formation of the coalition government with the Progressive Democrats, describing it “as hitting at Fianna Fáil core values.” In 1990, he attacks the opposition presidential candidate Mary Robinson on a radio show, accusing her of “having a new-found interest in her family” for the purposes of her election campaign. This attack backfires drastically, causing many women who initially support Brian Lenihan to back Robinson. Lenihan’s campaign never recovers and Robinson becomes Ireland’s first female President.

In 1991, Flynn is sacked from the Cabinet because of his support for a motion of no confidence in the Taoiseach, Charles Haughey. Then in 1992, Albert Reynolds becomes Taoiseach and Flynn is rewarded for supporting Reynolds by becoming Minister for Justice. In 1993, he retires from domestic politics when he is appointed Ireland’s European Commissioner. He is reappointed by the Fine Gael–Labour Party government in 1995 and, on both of these occasions, serves in the social affairs portfolio.

On January 15, 1999, Flynn makes comments on The Late Late Show regarding Tom Gilmartin and a donation of IR£50,000 to the Fianna Fáil party. He also makes comments about his own lifestyle, boasting of having a salary of IR£140,000 together with three houses, cars and housekeepers and travels regularly, yet complains about the hassle involved. The performance was seen as eccentric and out of touch. In effect, he is interpreted as behaving in a manner more befitting the Irish stereotype known as the Dublin 4 mentality, complaining of the costs incurred in the pursuit of extravagance.

The show’s presenter, Gay Byrne, then asks Flynn if he knows of Gilmartin. He responds that he knows him well. He seems to be making an attack of Gilmartin’s emotional stability, based on the effect of sickness of Gilmartin’s wife. If it is to be interpreted as an attack of Gilmartin’s credibility, it backfires in a spectacular manner against Flynn. Also, unknown to Flynn, Gilmartin is actually watching the program at his home in Luton. This hurts Gilmartin a great deal, while also bringing the illness of his wife into the picture as the real driving force behind Gilmartin’s testimony against Flynn. Gilmartin responds by releasing details of meetings he held with Flynn to the McCracken Tribunal. The interview is widely described as the end of Flynn’s political career.

Flynn’s second term as European Commissioner ends early in September 1999, when the entire commission resigns due to allegations of malpractice by the European Parliament. He is not reappointed to the Commission and retires from politics completely. He is a member of the Comite d’Honneur of the Institute of International and European Affairs.

Flynn is cited in the Mahon Tribunal for having received money from Frank Dunlop intended for Fianna Fáil, but diverted to his personal use. On March 22, 2012, the final report of the Mahon Tribunal is published. It finds that Flynn “wrongly and corruptly” sought a substantial donation from Tom Gilmartin for the Fianna Fáil party. It also finds that having been paid IR£50,000 by Gilmartin, for that purpose, Flynn proceeded to use that money for his personal benefit, and that the donation funded at least a significant portion of the purchase of a farm in County Mayo.

On March 26, 2012, facing expulsion following the Mahon Tribunal, Flynn resigns in disgrace from Fianna Fáil before he can be ousted.