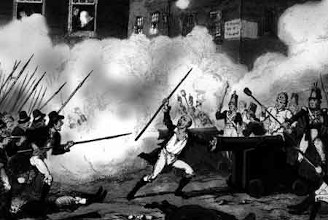 The Battle of Enniscorthy is a land battle fought on May 28, 1798 during the Irish Rebellion of 1798, when an overwhelming force of rebels assails the town of Enniscorthy, County Wexford, which is defended only by a 300-strong garrison supported by loyalist civilians. On the previous day at nearby Oulart, several thousand rebels led by Fr. John Murphy had massacred a detachment of the North Cork militia, amounting to 110 officers and men, in the Battle of Oulart Hill.

The attack on Enniscorthy begins at about 1:00 PM, when the rebels drive a herd of cattle through the town’s Duffry gate, creating disorder, and set the town’s buildings on fire. The troops defending the gate withdraw to a stone bridge over the River Slaney. After a determined defence of about three hours, the loyalist forces have expended their ammunition. They are also flanked by rebels wading across the river’s low water. However, after having driven all the rebels out of town they are ordered to abandon the town and withdraw to Wexford, which they do alongside a terrified multitude of men, women and children fleeing the burning town. In the action, the garrison and yeomanry had killed up to 500 insurgents at a cost of 90 of their own dead.

According to the historian Maxwell, the town’s Protestants see a merciless night attack as almost certain. Throughout the fight, Catholic residents support the rebels by shooting loyalists from their windows. Of the many fugitives, the weakest are carried on cavalry horses or otherwise abandoned to their fate, including infants and the elderly.

The rebels are brutal and vengeful in occupying their captured town. They set up a formidable encampment of 10,000 men on the nearby heights of Vinegar Hill and are able to roster forces to garrison Enniscorthy, whose streets are littered with dead and dying while flames continued to rage. Four hundred seventy-eight dwelling houses are destroyed in addition to commercial premises.