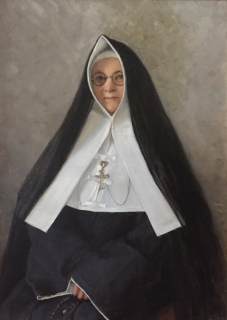 Mother Marie Joseph “Johanna” Butler, Irish nun, mother general of the Religious of the Sacred Heart of Mary and founder of Marymount colleges and schools, is born in Ballynunry, County Kilkenny on July 22, 1860.

Butler is the seventh child of John Butler, gentleman farmer, and Ellen (née Forrestal). She attends the Sisters of Mercy school in New Ross, County Wexford, entering the Congregation of the Sacred Heart of Mary in Béziers, France in 1876. She takes the name Marie Joseph when she is sent to Porto, Portugal in 1879, professing in 1880. From 1880 to 1903 she teaches in Porto and Braga, becoming superior of the school in 1893.

In 1903 Butler is appointed head of the congregation’s school at Sag Harbor, Long Island, New York, with the responsibility to extend the influence of the order in there. Her cousin, James Butler, gives her a site in Tarrytown, New York in 1907 where she founds the first Marymount school that year, and then the first Marymount college in 1918. She acts as president of the college, with the institution being granted a charter from the University of the State of New York to award bachelor’s degrees in 1924. She is elected Mother General of her order in 1926 and serves until her death, being the first American superior elected to the international congregation of the Catholic Church. She introduces a unique educational system incorporating high religious and academic standards with the aim of preparing young women for a changing society. She becomes a citizen of the United States in 1927.

Butler dies on April 23, 1940 in Tarrytown and is buried there. In 1954 her spiritual writings are published as As an eagle: the spiritual writings of Mother Butler R.S.H.M. by J.K. Leahy. She is put forward as a candidate for canonisation in 1948.