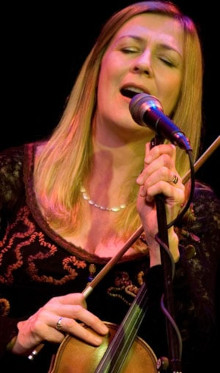 Mairéad Ní Mhaonaigh, Irish fiddler and lead vocalist for the Irish traditional music band Altan, is born on July 26, 1959 in Gweedore, County Donegal, where Gaeilge is her primary language and she learns her songs and tunes from her family and neighbours.

Ní Mhaonaigh’s father, Proinsias Ó Maonaigh, is a noted fiddler, song writer and school teacher and is her first main influence. Her mother, Kitty Rua is also raised in a musical house that holds frequent house dances. It is no surprise that she and her siblings, Gearóid and Anna, all play music together.

In the early 1980s, Ní Mhaonaigh qualifies as a Primary school teacher and teaches in Saint Oliver Plunkett National School in Malahide, County Dublin. She and her husband, Frankie Kennedy, record Ceol Aduaidh (Music from the North) for Irish label Gael Linn in 1983. This timeless recording is the genesis of what later becomes Altan. The recording features her brother Gearóid Ó Maonaigh on guitar, Fintan Mc Manus on bouzouki, Ciaran Curran on bouzouki and Eithne Ní Bhraonáin (now known as Enya) on keyboards. The album quietly gains praise among enthusiasts of traditional Irish music worldwide, which leads the way for a career in music.

Ní Mhaonigh’s teaching career comes to a halt after she and her husband take a career break in 1987 and formed Altan. The band goes on to become one of the most acclaimed Irish traditional bands touring the world. They record for Green Linnet Records in the United States and tour North America extensively.

In 1994, Frankie Kennedy passes away to cancer, which is a tremendous loss to Ní Mhaonigh. She continues with the band at her late husband’s request and signs to multinational record label Virgin Records London in late 1994. This marks the first traditional Irish band to be signed to a major record label and propels Altan and Ní Mhaonigh into a wider audience of followers.

Altan travels all over the world headlining shows from Tokyo, the Sydney Opera House, the Hollywood Bowl to the National Concert Hall, Dublin.

Ní Mhaonaigh, along with fronting Altan, remains close her roots between touring and returns to her native County Donegal to play, sing and teach her music to a new generation. She helps set up Cairdeas na bhFidléirí (The Fellowship / Friendship of Fiddlers) in the early 1980s to promote and preserve the fiddle music of County Donegal.

In 2009, Ní Mhaonaigh releases her first solo album, Imeall (Edge/Theshold), as a limited edition. After many years of playing with the band and numerous requests for a solo recording she finally gets time to record the album after parting with her second husband Dermot Byrne, with whom she has her daughter Nia. She tours the album between Altan commitments with her co-producer and recording engineer Manus Lunny.

The album prompts one reviewer, Paul O’Connor, to remark, “Her identified success as the leader of Altan has dominated our sense of her to the point that we aren’t cognisant of how good she is as an artist, musician, composer in her own right.”

This new focus on Ní Mhaonaigh as an artist in her own right, prompts The Donegal Association in Dublin to grant her “Donegal Person of the Year 2009” at a gala dinner in Dublin’s prestigious Burlington Hotel.

Ní Mhaonaigh is awarded the top recognition in traditional Irish music by her fellow peers in 2018, when she is awarded TG4 Gradam Ceoil’s Traditional Musician of the Year. The following year, she is honoured in her own county at the now world famous “Cup o’Tae Festival” which is held annually in Ardara, County Donegal.

Ní Mhaonaigh is also a member of String Sisters, which is a Grammy listed folk supergroup of six of the world’s leading female fiddlers. Together they have released two albums – the Grammy-longlisted Live and Between Wind and Water. She is a member of T with the Maggies, which is a vocal supergroup of Donegal singers comprised of Maighread and Tríona Ní Dhomhnaill and Moya Brennan of Clannad fame.

Recently Ní Mhaonaigh has recorded with a group of thirteen County Donegal-based female fiddlers which is called ‘SíFiddlers.’