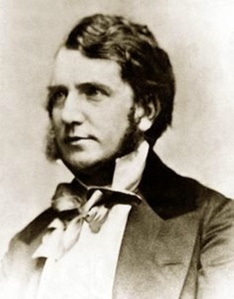 Joseph Thomas Sheridan Le Fanu, journalist, novelist, and short story writer, often called the father of the modern ghost story, is born in Dublin on August 28, 1814. He is the leading ghost story writer of the nineteenth century and is central to the development of the genre in the Victorian era. His best known works include Uncle Silas (1864), a suspense story, and The House by the Churchyard (1863), a murder mystery. His vampire story Carmilla, which influences Bram Stoker’s Dracula, has been filmed several times.

Le Fanu is born at 45 Lower Dominick Street in Dublin to Thomas Philip Le Fanu and Emma Lucretia Dobbin, a literary family of Huguenot, Irish, and English descent. Within a year of his birth the family moves to the Royal Hibernian Military School in Phoenix Park where his father, a Church of Ireland clergyman, is appointed to the chaplaincy of the establishment.

In 1826, the family moves to Abington, County Limerick, where Le Fanu’s father takes up his second rectorship. Le Fanu uses his father’s library to educate himself and by the age of fifteen he was writing poetry.

The disorders of the Tithe War (1831–1836) affect the region in 1832 and the following year the family temporarily moves back to Dublin, where Le Fanu works on a Government commission. Although Thomas Le Fanu tries to live as though he is well-off, the family is in constant financial difficulty. At his death, Thomas has almost nothing to leave to his sons and the family has to sell his library to pay off some of his debts.

Le Fanu studies law at Trinity College, Dublin, where he is elected Auditor of the College Historical Society. He is called to the bar in 1839, but never practices and soon abandons law for journalism. In 1838 he begins contributing stories to the Dublin University Magazine, including his first ghost story, The Ghost and the Bone-Setter (1838). He becomes owner of several newspapers from 1840, including the Dublin Evening Mail and the Warder.

In 1847, Le Fanu supports John Mitchel and Thomas Francis Meagher in their campaign against the indifference of the government to the Irish Famine. Others involved in the campaign include Samuel Ferguson and Isaac Butt. Butt writes a forty-page analysis of the national disaster for the Dublin University Magazine in 1847. Le Fanu’s support costs him the nomination as Tory Member of Parliament (MP) for County Carlow in 1852.

In 1856 the family moves from Warrington Place to the house of his wife Susanna’s parents at 18 Merrion Square. His personal life becomes difficult at this time, as his wife suffers from increasing neurotic symptoms. She suffers from anxiety after the deaths of several close relatives, including her father two years previous. In April 1858, Susanna suffers a “hysterical attack” and dies the following day. She is buried in the Bennett family vault in Mount Jerome Cemetery beside her father and brothers. He does not write any fiction from this point until the death of his mother in 1861.

He becomes the editor and proprietor of the Dublin University Magazine in 1861 and begins to take advantage of double publication, first serializing in the Dublin University Magazine, then revising for the English market. He publishes both The House by the Churchyard and Wylder’s Hand in this manner. After lukewarm reviews of The House by the Churchyard, which is set in the Phoenix Park area of Dublin, Le Fanu signs a contract with Richard Bentley, his London publisher, which specifies that future novels be stories “of an English subject and of modern times,” a step Bentley thinks necessary for Le Fanu to satisfy the English audience. Le Fanu succeeds in this aim in 1864, with the publication of Uncle Silas, which is set in Derbyshire. In his very last short stories, however, Le Fanu returns to Irish folklore as an inspiration and encourages his friend Patrick Kennedy to contribute folklore to the Dublin University Magazine.

Le Fanu dies in his native Dublin on February 7, 1873, at the age of 58. Today there is a road and a park in Ballyfermot, near his childhood home in south-west Dublin, named after him.