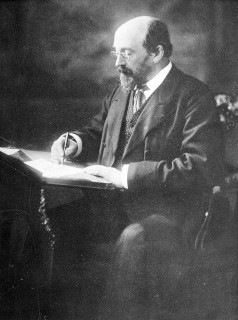 Whitla is the fourth son of Robert Whitla, a woolen draper and pawnbroker, and his wife Anne, daughter of Alexander Williams of Dublin. His first cousin is painter Alexander Williams. Educated at the town’s Model School, he is articled at fifteen to his brother James, a local pharmacist, completing his apprenticeship with Wheeler and Whitaker, Belfast‘s leading pharmaceutical firm. Proceeding to study medicine at Queen’s College, Belfast, he takes the LAH, Dublin, and the LRCP and LRCS of Edinburgh in 1873.

With his qualifications Whitla obtains a post as resident medical officer at the Belfast General Hospital. He next spends some time in London, at St. Thomas’s Hospital, where he meets his future wife, Ada Bourne, daughter of George Bourne, a prominent Staffordshire farmer. She is a ward sister and friend of Florence Nightingale and a member of The Salvation Army.

The pair are married in 1876, settling in Belfast where Whitla establishes a general medical practice. He is awarded the MD of the Queen’s University of Ireland in 1877, with first class honours, gold medal, and commendation.

Whitla is appointed physician to the Belfast Royal Hospital and the Ulster Hospital for Children and Women in 1882. He holds post at the Belfast Royal Hospital and in the Royal Victoria Hospital, of which it is the forerunner, until his retirement in 1918. He succeeds Seaton Reid as professor of materia medica at the Queen’s College in 1890 and is twice president of the Ulster Medical Society (1886–1887, 1901–1902). Appointed a Knight Bachelor in the 1902 Coronation Honours list published on June 26, 1902, he is knighted by the Lord Lieutenant of Ireland, George Cadogan, 5th Earl Cadogan, at Dublin Castle on August 11, 1902.

In 1906 Whitla is appointed a governor of Methodist College Belfast and he takes a keen interest in the school’s affairs. In 1919, he retires as Professor of Materia Medica in the university.

A strong unionist, Whitla is elected to parliament in 1918, serving until 1923 as representative of the Queen’s University at Westminster. He is appointed honorary physician to the king in Ireland in 1919 and is subsequently university pro-chancellor.

During the 1920s Whitla’s public appearances are fewer and, after a stroke in 1929, he is confined to his room. Lady Whitla dies in 1932. He dies at their Belfast residence, Lennoxvale, on December 11, 1933, and is given a civic funeral two days later. He is buried at Belfast City Cemetery.

During Whitla’s lifetime his gifts to his profession include the Good Samaritan stained glass window erected in the Royal Hospital and a building to house the Ulster Medical Society. At his death Lennoxvale is bequeathed to Queen’s University as a residence for the Vice-Chancellor. The university also is his residuary legatee and acts on his suggestion that the available funds should provide an assembly hall. The Sir William Whitla Hall is opened in 1949.