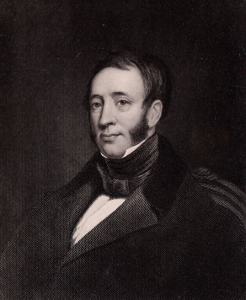 Richard Robert Madden, Irish doctor, writer, abolitionist and historian of the Society of United Irishmen, is born on August 22, 1798. He takes an active role in trying to impose anti-slavery rules in Jamaica on behalf of the British government.

Madden is born at Wormwood Gate, Dublin to Edward Madden, a silk manufacturer, and his wife Elizabeth (nee Corey). His father has married twice and fathered twenty-one children. Luckily for young Richard his father is still affluent enough by the time he is reaching adolescence to afford him a top quality education. This means private schools and a medical apprenticeship in Athboy, County Meath. He studies medicine in Paris, Italy, and St. George’s Hospital, London. While in Naples he becomes acquainted with Marguerite Gardiner, Countess of Blessington and her circle.

In 1828 Madden marries Harriet Elmslie, herself coincidentally the youngest of twenty one children. Born in Marylebone in 1801 and baptised there into the Church of England, she is the last child of John Elmslie, a Scot who owns hundreds of slaves on his plantations in Jamaica, and his wife Jane Wallace. Both Harriet’s parents are of Quaker stock, but while living in Cuba she converts to Roman Catholicism. On marriage, Madden stops travelling and practises medicine for five years.

Eventually he realises that he needs to contribute to the abolitionist cause. The slave trade has been illegal in the empire since 1807, but slaves still exist. Abolishing slavery is a popular cause and it is obvious that the trading of slaves is still in progress and many are not actively involved but they are complicit with the activity.

Madden is employed in the British civil service from 1833, first as a justice of the peace in Jamaica, where he is one of six Special Magistrates sent to oversee the eventual liberation of Jamaica’s slave population, according to the terms of the Slavery Abolition Act 1833. From 1835 he is Superintendent of the freed Africans in Havana. His son, Thomas More Madden, who later becomes a surgeon and writer, is born there. In 1839 he becomes the investigating officer into the slave trade on the west coast of Africa and, in 1847, the secretary for the West Australian colonies. He returns to Dublin and in 1850 is named secretary of the Office for Loan Funds in Dublin.

Richard Madden dies at his home in Booterstown, just south of Dublin, on February 5, 1886 and is interred in Donnybrook Cemetery. 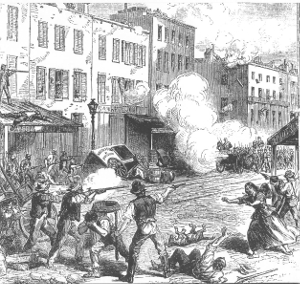 The New York City draft riots, one of the more regrettable incidents related to Irish American history, begin on July 13, 1863 and continue through July 16. Known at the time as Draft Week, they are violent disturbances in Lower Manhattan, widely regarded as the culmination of working-class discontent with new laws passed by Congress that year to draft men to fight in the ongoing American Civil War. The riots remain the largest civil and racial insurrection in American history, aside from the Civil War itself.

The cry of “rich man’s war, poor man’s fight” is the cry of many in the Northern states. The rioters, predominantly Irish immigrants, are overwhelmingly working-class men, who resent that wealthier men, who can afford to pay a $300 commutation fee to hire a substitute, are spared from the draft, worried that the eventual emancipation of blacks will rob them of their jobs, and are egged on by some politicians and Southern agents.

Initially intended to express anger at the draft, the protests turn into a race riot, with white predominantly Irish rioters, attacking blacks throughout the city. The official death toll is listed at either 119 or 120 individuals. Conditions in the city are such that Major General John E. Wool, commander of the Department of the East, says on July 16 that “Martial law ought to be proclaimed, but I have not a sufficient force to enforce it.”

U.S. President Abraham Lincoln diverts several regiments of militia and volunteer troops from following up after the Battle of Gettysburg to control the city.

The military does not reach the city until after the first day of rioting, by which time the mobs, have already ransacked or destroyed numerous public buildings, two Protestant churches, the homes of various abolitionists or sympathizers, many black homes, and the Colored Orphan Asylum at 44th Street and Fifth Avenue, which is burned to the ground.

The area’s demographics change as a result of the riot. Many blacks leave Manhattan permanently, many moving to Brooklyn. By 1865 their population falls below 10,000, the number in 1820.

Through the years the story is told as if only Irish riot, but in fact many besides the Irish take part, and many Irish policemen, fireman, priests, and trade unionists are among the most influential in quelling them. Still, it cannot be denied, a large number of Irish do participate in the burning of the black orphanage and murder of blacks in the city. This unfortunate episode leaves a lasting stain on the reputation of New York’s Irish community.