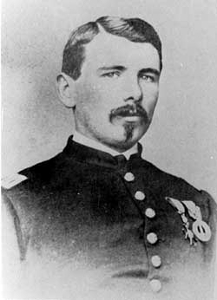 Myles Walter Keogh, soldier in the United States Army, is born in Orchard House in Leighlinbridge, County Carlow, on March 25, 1840. It is said by the Sioux that he is the last man killed at the Battle of Little Big Horn, where his horse is the only U.S. survivor.

Keogh attends the National School in Leighlinbridge and is long thought to have attended St. Patrick’s College in Carlow but that college has no record of his attendance. It is possible that he attends St. Mary’s Knockbeg College.

By 1860, a twenty-year-old Keogh volunteers, along with over one thousand of his countrymen, to rally to the defence of Pope Pius IX following a call to arms by the Catholic clergy in Ireland. By August 1860, Keogh is appointed second lieutenant of his unit in the Battalion of St. Patrick, Papal Army under the command of General Christophe Léon Louis Juchault de Lamoricière. Once the fighting is over and duties of the Pontifical Swiss Guard become more mundane, Keogh sees little purpose in remaining in Rome. In March 1862, with civil war raging in America, he resigns his commission in the Company of St. Patrick and sets out for New York City, arriving on April 2.

Perhaps the strongest testimony to Keogh’s bravery and leadership ability comes at the Battle of the Little Bighorn, also known as Custer’s Last Stand, on June 25, 1876. The senior captain among the five companies wiped out with General George Armstrong Custer that day, and commanding one of two squadrons within the Custer detachment, Keogh dies in a “last stand” of his own, surrounded by the men of Company I. When the sun-blackened and dismembered dead are buried three days later, Keogh’s body is found at the center of a group of troopers. The slain officer is stripped but not mutilated, perhaps because of the “medicine” the Indians see in the Agnus Dei (“Lamb of God”) he wears on a chain about his neck or because many of Sitting Bull‘s warriors are believed to be Catholic. Keogh’s left knee has been shattered by a bullet that corresponds to a wound through the chest and flank of his horse, indicating that horse and rider may have fallen together prior to the last rally.

The badly injured animal is found on the fatal battlefield, and nursed back to health as the 7th Cavalry’s regimental mascot, which he remains until his death in 1890. This horse, Comanche, is considered the only U.S. military survivor of the battle, though several other badly wounded horses are found and destroyed at the scene. Keogh’s bloody gauntlet and the guidon of his Company I are recovered by the army three months after Little Bighorn at the Battle of Slim Buttes.

Originally buried on the battlefield, Keogh’s remains are disinterred and taken to Auburn, as he had requested in his will. He is buried at Fort Hill Cemetery on October 26, 1877, an occasion marked by citywide official mourning and an impressive military procession to the cemetery.

Tongue River Cantonment in southeastern Montana is renamed after him to be Fort Keogh. The fort is first commanded by Nelson A. Miles. The 55,000-acre fort is today an agricultural experiment station. Miles City, Montana is located two miles from the old fort.