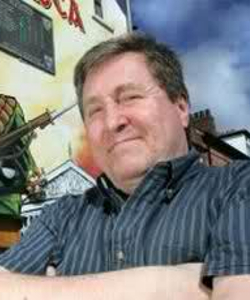 Joe Doherty, a volunteer in the Belfast Brigade of the Provisional Irish Republican Army (IRA) who escapes during his 1981 trial for killing a member of the Special Air Service (SAS) in 1980, is arrested in the United States in 1983 and is deported to Northern Ireland by the U.S. government on February 19, 1992. A first season episode of Law & Order entitled “The Troubles” is based on his case.

The trial of Doherty and the other members of their four-man active service unit nicknamed the “M60 gang” begins in early May 1981, on charges including three counts of murder. On June 10, Doherty and seven other prisoners, including Angelo Fusco and the other members of the IRA unit, take a prison officer hostage at gunpoint in Crumlin Road Gaol and ultimately escape in waiting cars. Two days after the escape, Doherty is convicted in absentia and sentenced to life imprisonment with a minimum recommended term of thirty years.

Doherty escapes across the border into the Republic of Ireland, and then travels to the United States on a false passport. He lives with an American girlfriend in Brooklyn and New Jersey, working on construction sites and as a bartender at Clancy’s Bar in Manhattan, where he is arrested by the FBI on June 28, 1983. He is imprisoned in the Metropolitan Correctional Center in Manhattan, and a legal battle ensues with the British government seeking to extradite him back to Northern Ireland. Doherty claims he is immune from extradition as the killing of Royal Irish Constabulary Captain Herbert Westmacott was a political act. In 1985 federal judge John E. Sprizzo rules Doherty can not be extradited as the killing is a “political offense.” Doherty’s legal battle continues as the United States Department of Justice then attempts to deport him for entering the country illegally.

Doherty remains in custody at the Metropolitan Correctional Center and attempts to claim political asylum, and on June 15, 1988 Attorney General Edwin Meese overturns an earlier ruling by the Federal Board of Immigration Appeals that Doherty can be deported to the Republic of Ireland, and orders his deportation to Northern Ireland. In February 1989 new Attorney General Dick Thornburgh chooses not to support the decision made by his predecessor, and asks lawyers for Doherty and the Immigration and Naturalization Service to submit arguments for a review of the decision and Doherty’s claim for asylum. By this time Doherty’s case is a cause célèbre with his sympathisers including over 130 Congressmen and a son of then President of the United States George H. W. Bush. In 1990 a street corner near the Metropolitan Correctional Center is named after him.

In August 1991, Doherty is transferred to a federal prison in Lewisburg, Pennsylvania, and on January 16, 1992 the Supreme Court of the United States overturns a 1990 Federal Appeals Court ruling by a 5-to-3 decision, paving the way for his deportation. On February 19, 1992 Doherty is deported to Northern Ireland, despite pleas to delay the deportation from members of Congress, Mayor of New York City David Dinkins, and the Cardinal Archbishop of New York, John Joseph O’Connor.

Doherty is returned to Crumlin Road Gaol before being transferred to HM Prison Maze. He is released from prison on November 6, 1998 under the terms of the Good Friday Agreement. After his release Doherty becomes a community worker specialising in helping disadvantaged young people. In 2006, he appears in the BBC television show Facing the Truth opposite the relatives of a soldier killed in the Warrenpoint ambush.