Joe Doherty, former volunteer in the Belfast Brigade of the Provisional Irish Republican Army (IRA), is born on January 20, 1955 in New Lodge, Belfast.

The son of a docker, Doherty is born into an Irish republican family, his grandfather being a member of the Irish Citizen Army which fought against British rule in the 1916 Easter Rising. Doherty leaves school at the age of 14 and begins work on the docks and as an apprentice plumber, before being arrested in 1972 on his seventeenth birthday under the Special Powers Act. He is interned on the prison ship HMS Maidstone and at Long Kesh Detention Centre, and while interned hears of the events of Bloody Sunday in Derry, where 14 civil rights protesters were shot dead by the British Army. This leads to him joining the IRA after he is released in June 1972. In the mid-1970s he is convicted of possession of explosives and sentenced to six years imprisonment in Long Kesh. He is released in December 1979.

After his release, Doherty becomes part of a four-man active service unit nicknamed the “M60 gang” due to their use of an M60 heavy machine gun, along with Angelo Fusco and Paul Magee. On April 9, 1980 the unit lures the Royal Ulster Constabulary (RUC) into an ambush on Stewartstown Road, killing one constable and wounding two others. On May 2 the unit is planning another attack and has taken over a house on Antrim Road, when an eight-man patrol from the Special Air Service (SAS) arrive in plain clothes, after being alerted by the RUC. A car carrying three SAS members goes to the rear of the house, and another car carrying five SAS members arrives at the front of the house. As the SAS members at the front of the house exit the car, the IRA unit opens fire with the M60 machine gun from an upstairs window, hitting Captain Herbert Westmacott in the head and shoulder. Westmacott, who is killed instantly, is the highest-ranking member of the SAS killed in Northern Ireland. The remaining SAS members at the front, armed with Colt Commando automatic rifles, submachine guns and Browning pistols, return fire but are forced to withdraw. Magee is apprehended by the SAS members at the rear of the house while attempting to prepare the IRA unit’s escape in a transit van, while the other three IRA members remain inside the house. More members of the security forces are deployed to the scene and, after a brief siege, the remaining members of the IRA unit surrender.

The trial of Doherty and the other members of the M60 gang begins in early May 1981, on charges including three counts of murder. On June 10, Doherty and seven other prisoners, including Angelo Fusco and the other members of the IRA unit, take a prison officer hostage at gunpoint in Crumlin Road Gaol. After locking the officer in a cell, the eight take other officers and visiting solicitors hostage, also locking them in cells after taking their clothing. Two of the eight wear officers’ uniforms while a third wears clothing taken from a solicitor, and the group moves towards the first of three gates separating them from the outside world. They take the officer on duty at the gate hostage at gunpoint, and force him to open the inner gate. An officer at the second gate recognises one of the prisoners and runs into an office and presses an alarm button, and the prisoners run through the second gate towards the outer gate. An officer at the outer gate tries to prevent the escape but is attacked by the prisoners, who escape onto Crumlin Road. As the prisoners are moving towards the car park where two cars are waiting, an unmarked RUC car pulls up across the street outside Crumlin Road Courthouse. The RUC officers open fire and the prisoners return fire before escaping in the waiting cars. Two days after the escape, Doherty is convicted in absentia and sentenced to life imprisonment with a minimum recommended term of thirty years.

Doherty escapes across the border into the Republic of Ireland, and then travels to the United States on a false passport. He lives with an American girlfriend in Brooklyn and New Jersey, working on construction sites and as a bartender at Clancy’s Bar in Manhattan, where he is arrested by the Federal Bureau of Investigation (FBI) on June 28, 1983. He is imprisoned in the Metropolitan Correctional Center in Manhattan, and a legal battle ensues with the British government seeking to extradite him back to Northern Ireland. Doherty claims he is immune from extradition as the killing of Westmacott was a political act, and in 1985 federal judge John E. Sprizzo rules Doherty cannot be extradited as the killing was a “political offense.” His legal battle continues as the United States Department of Justice then attempts to deport him for entering the country illegally.

Doherty remains in custody at the Metropolitan Correctional Center and attempts to claim political asylum, and June 15, 1988 the United States Attorney General Edwin Meese overturns an earlier ruling by the Federal Board of Immigration Appeals that Doherty can be deported to the Republic of Ireland, and orders his deportation to Northern Ireland. In February 1989 new Attorney General Dick Thornburgh chooses not to support the decision made by his predecessor, and asks lawyers for Doherty and the Immigration and Naturalization Service to submit arguments for a review of the decision and Doherty’s claim for asylum. By this time Doherty’s case is a cause célèbre with his sympathisers including over 130 Congressmen and a son of then President of the United States George H. W. Bush, and in 1990 a street corner near the Metropolitan Correctional Center is named after him.

In August 1991, Doherty is transferred to a federal prison in Lewisburg, Pennsylvania, and on January 16, 1992 the Supreme Court of the United States overturns a 1990 Federal Appeals Court ruling by a 5-to-3 decision, paving the way for his deportation. On February 19, 1992 he is deported to Northern Ireland, despite pleas to delay the deportation from members of Congress, Mayor of New York City David Dinkins, and the Cardinal Archbishop of New York, John Joseph O’Connor. He is returned to Crumlin Road Gaol before being transferred to HM Prison Maze, and is released from prison on November 6, 1998 under the terms of the Good Friday Agreement. After his release he becomes a community worker specialising in helping disadvantaged young people. In 2006, he appears in the BBC television show Facing the Truth opposite the relatives of a soldier killed in the Warrenpoint ambush. 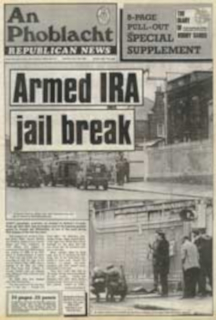 Eight Provisional Irish Republican Army prisoners escape from Crumlin Road Gaol in Belfast, one of the most heavily guarded prisons in Europe, on June 10, 1980. Using handguns that had been smuggled into the prison, they take prison officers hostage and shoot their way out of the building and exit through the front gate.

The regime inside Crumlin Road Gaol on that day is just like any other. The prison had been the scene of several protests regarding strip-searching shortly beforehand, but the rules had been somewhat relaxed. On A and C Wings the remand prisoners are outside in the yard for exercise. As usual, several men from each wing are called for visits. Some of these visits are from solicitors and an area of the prison is set aside to allow legal teams and the accused a place to discuss their business in private.

When warders come to return one set of prisoners to their wing, the operation begins. One of the Volunteers produces a gun, forces the warders to release the other prisoners and then locks about ten warders in the cell. They then make their way to B wing’s visiting area and arrest all the warders, visitors and solicitors who are there, before locking about thirty up in a room. One warder named Killen reaches for his baton, is disarmed and hit over the head.

Two warders and a solicitor are ordered to strip and three of the IRA Volunteers, dress in two uniforms and a suit respectively, calmly walk to the main gate which is opened for them. They then pull guns on the real warders in this key security area and make them lie on the ground until their five comrades run across a small courtyard to join them.

Once outside however, the alarm is set off and British Army sentries pour a hail of automatic fire at the prisoners from a watch tower before they are able to reach the front gate. Undeterred, the prisoners dash through the bullets, weaving from side to side to throw off their attackers.

As the men make their escape, clearly visible to republican prisoners in cells on the top landing of A wing, loud cheers go up and makeshift flags are flown from the windows.

Outside the prison, cars have been parked by the IRA’s Belfast Brigade in the car park of the health clinic beside the courthouse, their ignition keys hidden under the floor mats. The prisoners run across the road towards the health centre, dodging bullets as they run. The escapees head towards the loyalist Shankill area where they commandeer cars to help their getaway.

Stunned by the daring escapees, the crown forces erect checkpoints across Belfast and along all border routes.

Seven of the escapees, known as the “M60 gang,” are brothers Tony and Gerry Sloan, Gerard McKee, Joe Doherty, Angelo Fusco, Paul ‘Dingus’ Magee and Tony Campbell. All are from Belfast and charged in connection with either an M60 machine gun attack in 1980 on a Royal Ulster Constabulary (RUC) patrol in Andersonstown, or with the siege on the Antrim Road in May 1980, when a Special Air Service (SAS) captain is killed. The eighth escapee is Pete Ryan from Ardboe, County Tyrone who had been charged with killing an RUC Reservist and an Ulster Defence Regiment (UDR) soldier.

All eight men reach safe houses within an hour and, after a lying low for a short while, are spirited over the border to begin new lives “on the run.”

One week later, at the annual pilgrimage to the graveside of Wolfe Tone, the father of republicanism, which is always a source of renewed strength for its participants, the crowd is given an added morale boost when at the closing ceremony, one of the escapees, Paul ‘Dingus’ Magee, makes a dramatic appearance on the platform.

There are many more attempts to break free from Crumlin Road Gaol before it finally closes its doors in April 1995, having being used as a weapon in the attempted suppression of the Irish freedom struggle for 151 years.