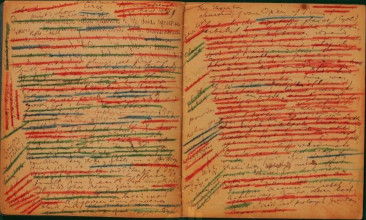 The original manuscript of James Joyce‘s Ulysses arrives in its “spiritual home” for the first time on June 13, 2000 when it goes on display at the Chester Beatty Library on the grounds of Dublin Castle in Dublin, the city that inspired the novel.

Spidery sentences penned on yellowing paper and littered with scribbled alterations make up the first draft of what many scholars consider to be the most influential work of fiction of the 20th century. It is the centerpiece of a Joyce exhibition at the Chester Beatty library which runs through the end of September 2000.

Derick Dreher, director of the Rosenbach Museum and Library in Philadelphia, Pennsylvania, where the manuscript has been kept since 1924, says it marks the homecoming of a work which is “quintessentially Irish.” He adds, “People are amazed that it has never been here before. The novel captures the essence of Dublin and yet was composed entirely on foreign soil and then sold in America.”

Dreher says that Joyce’s handwriting is so bad it is hard to make out what is written on many of the pages. Joyce left Dublin with servant girl, Nora Barnacle, in 1904 and writes Ulysses in Trieste, Zürich and Paris between 1914 and 1921. Ultimately, he marries Barnacle in 1931.

The novel traces the wanderings of a young writer, Stephen Dedalus, and advertisement canvasser, Leopold Bloom, on June 16, 1904, the day on which Joyce first goes out with Barnacle. He sells the manuscript to New York City lawyer and art patron, John Quinn, for $12,000 before its publication in 1921.

The Freeman’s Journal, the oldest nationalist newspaper in Dublin, is founded by Charles Lucas on September 10, 1763. It is identified with radical 18th-century Protestant patriot politicians Henry Grattan and Henry Flood. This changes from 1784 when it passes to Francis Higgins and takes a more pro-British and pro-administration view. In fact, Higgins is mentioned in the Secret Service Money Book as having betrayed Lord Edward FitzGerald. Higgins is paid £1,000 for information on FitzGerald’s capture.

In the 19th century The Freeman’s Journal becomes more nationalist in tone, particularly under the control and inspiration of Sir John Gray (1815–75).

The Journal, as it is widely known, is the leading newspaper in Ireland throughout the 19th century. Contemporary sources record it being read to the largely illiterate population by priests and local teachers gathering in homes. It is mentioned in contemporary literature as when James Joyce immortalises The Freeman’s Journal as the place of employment of Leopold Bloom in Ulysses. It is seen as symbolising Irish newspapers for most of its time. By the 1880s it becomes the primary media supporter of Charles Stewart Parnell and the Irish Parliamentary Party (IPP).

The Journal is challenged on all sides by rivals. On the nationalist side some prefer The Nation founded by Thomas Davis while others, including radical supporters of Parnell, read the United Irishman. The Anglo-Irish establishment in contrast reads the historically Irish unionist The Irish Times. With the split in the IPP over Parnell’s relationship with Katharine O’Shea, its readership splits too. While The Journal goes with the majority in 1893 in opposing Parnell, a minority moves to read the Daily Irish Independent. It is also challenged from the turn of the century by William O’Brien‘s The Irish People and the Cork Free Press. With Thomas Sexton becoming Chairman of the Board of Directors (1893–1911), The Journal languishes under his spartanic management.

The collapse of the IPP in 1918, and the electoral success of Sinn Féin, see a more radical nationalism appear that is out of step with the moderation of The Journal. It finds itself overshadowed by the more aggressively marketed Irish Independent, the successor to the Daily Irish Independent. Just prior to the outbreak of the Irish Civil War in March 1922, The Freeman’s Journal printing machinery is destroyed by Anti-Treaty IRA men under Rory O’Connor for its support of the Anglo-Irish Treaty. It does not resume publication until after the outbreak of civil war, when the Irish Free State re-asserts its authority over the country.

Crampton is the son of a dentist. He is a childhood friend of Theobald Wolfe Tone, the United Irishman, and a cousin, on his mother’s side, of Thomas Verner, Grand Master of the Orange Order. He joins the army when young and becomes an assistant surgeon. When he is appointed surgeon to the Meath Hospital in 1798 he is not yet fully qualified, and goes on to graduate in Glasgow in 1800. A few years later he also becomes assistant surgeon at the Westmoreland Lock Hospital, Dublin and also builds up a large private practice at his house in Dawson St. He joins Peter Harkan in teaching anatomy in private lectures, forming the first private school of anatomy and surgery in the city.

Crampton becomes a Fellow of the Royal Society (FRS) in Ireland for a treatise on the construction of eyes of birds, written in 1813. This is later published, with other writings, in the Dublin Journal of Medical Science.

Crompton resigns the chief-surgeoncy of the Westmoreland Lock Hospital when he is appointed surgeon-general to the forces in Ireland. He remains as consulting surgeon to Dr. Steevens’ Hospital and the Dublin Lying-In Hospital. He is three times president of the Dublin College of Surgeons and he is knighted in 1839.

Crompton is always interested in zoological science and plays an active part in founding the Royal Zoological Society of Ireland and is many times its president. He is also a member of the Royal Irish Academy.

The Crampton Memorial, at the junction of College St. with Pearse St. and D’Olier St., is erected from the design of sculptor John Kirk in 1862. It is of a curious design, consisting of a bust above a fountain and surmounted by a cascade of metal foliage. As it is slowly falling apart, it is removed in 1959. James Joyce references the monument in his novel Ulysses when Leopold Bloom passes the monument and thinks, “Sir Philip Crampton’s memorial fountain bust. Who was he?”