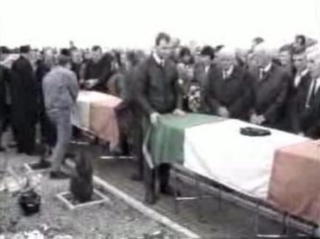 On March 6, 1988, Provisional Irish Republican Army members Daniel McCann, Seán Savage and Mairéad Farrell are shot dead by the Special Air Service (SAS) in Gibraltar, in Operation Flavius. The three were allegedly preparing a bomb attack on British military personnel there, but their deaths outrage republicans as the three are unarmed and shot without warning. Their bodies arrive in Belfast on March 14 and are taken to their family homes.

The “Gilbraltar Three” are scheduled to be buried in the republican plot at Milltown Cemetery on March 16. For years, republicans had complained about heavy-handed policing of IRA funerals, which had led to violence. In a change from normal procedure, the security forces agree to stay away from the funeral in exchange for guarantees that there will be no three-volley salute by IRA gunmen. The British Army and Royal Ulster Constabulary (RUC) would instead keep watch from the sidelines. This decision is not made public.

Present at the funeral are thousands of mourners and top members of the IRA and Sinn Féin, including Sinn Féin leader Gerry Adams and Martin McGuinness. Two RUC helicopters hover overhead.

Michael Stone, a loyalist and member of the Ulster Defence Association (UDA), learns there are to be no police or armed IRA members at the cemetery. As the third coffin is about to be lowered into the ground, Stone throws two grenades, which have a seven-second delay, toward the republican plot and begins shooting. The first grenade explodes near the crowd and about 20 yards from the grave. There is panic and confusion, and people dive for cover behind gravestones.

As Stone runs towards the nearby motorway, a large crowd begins chasing him and he continues shooting and throwing grenades. Some of the crowd catches Stone and begin beating him, but he is rescued by the police and arrested. Three people are killed and more than 60 wounded in the attack. The “unprecedented, one-man attack” is filmed by television news crews and causes shock around the world.

Three days later, two British Army corporals drive into the funeral procession of one of the Milltown victims. The non-uniformed soldiers are dragged from their car by an angry crowd, beaten and then shot dead by the IRA, in what becomes known as the corporals killings.

In March 1989, Stone is convicted for the three murders at Milltown, for three paramilitary murders before, and for other offences, receiving sentences totaling 682 years. He is released after serving 13 years as a result of the Good Friday Agreement.

(Pictured: The funeral at Milltown Cemetery in Belfast moments before the attack by Michael Stone)