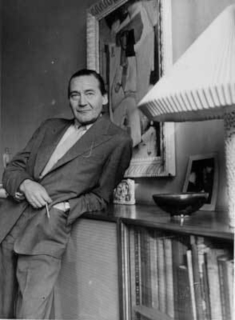 Michael Scott, Irish architect whose buildings include the Busáras building in Dublin, Cork Opera House, the Abbey Theatre and both Tullamore and Portlaoise Hospitals, is born in Drogheda on June 24, 1905.

Scott’s family originates in the province of Munster. His father, William Scott, is a school inspector from near Sneem on the Iveragh Peninsula in County Kerry. His mother is from County Cork. He is educated at Belvedere College in Dublin. There he first demonstrates his skills at painting and acting. Initially he wants to pursue a career as a painter but his father points out that it might make more financial sense to become an architect.

Scott becomes an apprentice for the sum of £375 per annum to the Dublin architectural firm Jones and Kelly. He remains there from 1923 until 1926, where he studies under Alfred E. Jones. In the evenings after work, he also attends the Metropolitan School of Art and the Abbey School of Acting, and appears in many plays there until 1927, including the first productions of Seán O’Casey’s Juno and the Paycock and The Plough and the Stars. On completing his pupilage he becomes an assistant to Charles James Dunlop and then has a brief spell as an assistant architect in the Office of Public Works.

In 1931 Scott partners with Norman D. Good to form Scott and Good, and they open an office in Dublin. They design the hospital at Tullamore (1934–1937) and Portlaoise General Hospital (1935). Between 1937 and 1938, he is the President of the Architectural Association of Ireland (AAI). He founds his company, Michael Scott Architects, in 1938. That same year he also designs his house Geragh, at Sandycove, County Dublin.

Scott’s most important pre-war commission is the Irish Pavilion for the 1939 New York World’s Fair. He produces a shamrock shaped building constructed in steel, concrete and glass. It is selected by an International jury as the best building in the show. As a result, he is presented with a silver medal for distinguished services and given honorary citizenship of the city of New York by then Mayor Fiorello H. La Guardia. Other better known architects who design national pavilions for this World Fair include Alvar Aalto of Finland and Oscar Niemeyer of Brazil.

Scott has three major commissions from the Córas Iompair Éireann CIÉ, the Inchicore Chassis Works, the Donnybrook Bus Garage and, most famously, the Dublin Central Bus Station, to be known as àras Mhic Dhiarmada or Busáras. Though initially controversial, Busáras wins Scott the Royal Institute of the Architects of Ireland Triennial Gold Medal for Architecture.

Scott, who spends most of his life living at Sandycove Point, just south of Dún Laoghaire in south Dublin, dies in Dublin on January 24, 1989 and is buried near Sneem in County Kerry.