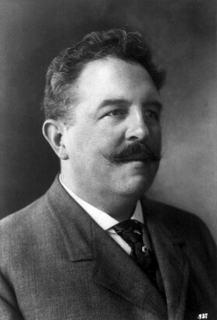 Victor August Herbert, an Irish-born, German-raised American composer, cellist and conductor, dies suddenly of a heart attack on May 26, 1924 shortly after his final show, The Dream Girl, begins its pre-Broadway run in New Haven, Connecticut.

Herbert is born in Dublin on February 1, 1859 to Protestants Edward Herbert and Fanny Herbert (née Lover). At age three and a half, shortly after the death of his father, he and his mother move to live with his maternal grandparents in London, England, where he received encouragement in his creative endeavours. His grandfather is the Irish novelist, playwright, poet and composer Samuel Lover. The Lovers welcome a steady flow of musicians, writers and artists into their home. He joins his mother in Stuttgart, Germany in 1867, a year after she marries a German physician, Carl Schmidt of Langenargen. In Stuttgart he receives a strong liberal education at the Eberhard-Ludwigs-Gymnasium, which includes musical training.

Herbert initially plans to pursue a career as a medical doctor. Although his stepfather is related by blood to the German royal family, his financial situation is not good by the time Herbert is a teenager. Medical education in Germany is expensive, and so he focuses instead on music. He initially studies the piano, flute and piccolo but ultimately settles on the cello, beginning studies on that instrument with Bernhard Cossmann from age 15 to age 18. He then attends the Stuttgart Conservatory. After studying cello, music theory and composition under Max Seifritz, he graduates with a diploma in 1879.

Although Herbert enjoys important careers as a cello soloist and conductor, he is best known for composing many successful operettas that premiere on Broadway from the 1890s to World War I. He is also prominent among the Tin Pan Alley composers and is later a founder of the American Society of Composers, Authors, and Publishers (ASCAP). A prolific composer, Herbert produces two operas, a cantata, 43 operettas, incidental music to 10 plays, 31 compositions for orchestra, nine band compositions, nine cello compositions, five violin compositions with piano or orchestra, 22 piano compositions and numerous songs, choral compositions and orchestrations of works by other composers, among other music.

In the early 1880s, Herbert begins a career as a cellist in Vienna, Austria, and Stuttgart, Germany, during which he begins to compose orchestral music. Herbert and his opera singer wife, Therese Förster, move to the United States in 1886 when both are engaged by the Metropolitan Opera. He continues his performing career, while also teaching at the National Conservatory of Music of America, conducting and composing. His most notable instrumental compositions are his Cello Concerto No. 2 in E minor, Op. 30 (1894), which enters the standard repertoire, and his Auditorium Festival March (1901). He leads the Pittsburgh Symphony Orchestra from 1898 to 1904 and then founds the Victor Herbert Orchestra, which he conducts throughout the rest of his life.

Herbert begins to compose operettas in 1894, producing several successes, including The Serenade (1897) and The Fortune Teller (1898). Some of the operettas that he writes after the turn of the 20th century are even more successful: Babes in Toyland (1903), Mlle. Modiste (1905), The Red Mill (1906), Naughty Marietta (1910), Sweethearts (1913) and Eileen (1917). After World War I, with the change of popular musical tastes, he begins to compose musicals and contributes music to other composers’ shows. While some of these are well-received, he never again achieves the level of success that he enjoyed with his most popular operettas.

A healthy man throughout his life, Herbert dies suddenly of a heart attack at the age of 65 on May 26, 1924 shortly after his final show, The Dream Girl, began its pre-Broadway run in New Haven. He is survived by his wife and two children, Ella Victoria Herbert Bartlett and Clifford Victor Herbert. He is entombed in Woodlawn Cemetery in The Bronx, New York City.

Herbert and his music are celebrated in the 1939 film The Great Victor Herbert, where he is portrayed by Walter Connolly and which also features Mary Martin. He is also portrayed by Paul Maxey in the 1946 film Till the Clouds Roll By. Many of Herbert’s own works are made into films, and his music has been used in numerous films and television shows. A Chicago elementary school is named for him. During World War II the Liberty ship SS Victor Herbert is built in Panama City, Florida, and named in his honor.