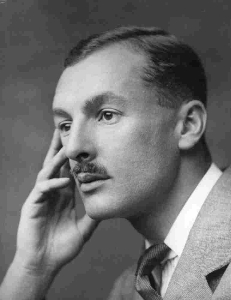 Irish novelist Arthur Joyce Lunel Cary is born in a hospital in Derry, County Londonderry, Northern Ireland on December 7, 1888. Shortly after his birth the family moved to London.

Cary is born into an old Anglo-Irish family, and at age 16 he studies painting in Edinburgh and then in Paris. From 1909 to 1912 he is at Trinity College, Oxford, where he reads law. Having joined the colonial service in 1914, he serves in the Nigeria Regiment during World War I. He is wounded while fighting in Cameroon and returns to civil duty in Nigeria in 1917 as a district officer. West Africa becomes the locale of his early novels.

Resolved to become a writer, Cary settles in Oxford in 1920. Although that year he publishes ten short stories in The Saturday Evening Post, he decides he knows too little about philosophy, ethics, and history to continue writing in good conscience. Study occupies the next several years, and it is only in 1932 that his first novel, Aissa Saved, appears. The story of an African girl converted to Christianity but still retaining pagan elements in her faith, it is followed by three more African novels — An American Visitor (1933), The African Witch (1936), and Mister Johnson (1939) — and a novel about the decline of the British Empire, Castle Corner (1938). Childhood is the theme of his next two novels, his own in A House of Children (1941) and that of a cockney wartime evacuee in the country in Charley Is My Darling (1940).

Cary’s trilogy on art begins with the first-person narration of a woman, Sara Monday, in Herself Surprised (1941) and follows with that of two men in her life, the lawyer Tom Wilcher in To Be a Pilgrim (1942) and the artist Gulley Jimson in The Horse’s Mouth (1944), his best-known novel. Monday is portrayed as a warm-hearted, generous woman who is victimized both by the conservative upper-class Wilcher and by the talented but disreputable painter Jimson. The latter character is a social rebel and visionary artist whose humorous philosophy and picaresque adventures in The Horse’s Mouth helped make him one of the best-known characters in 20th-century fiction.

Similarly, Cary’s other trilogy is seen from the vantage of a politician’s wife in A Prisoner of Grace (1952), the politician himself in Except the Lord (1953), and the wife’s second husband in Not Honour More (1955).

In 1952, Cary has some muscle problems which are originally diagnosed as bursitis, but as more symptoms are noted over the next two years, the diagnosis is changed to that of motor neuron disease (known as Lou Gehrig’s disease (ALS) in North America), a wasting and gradual paralysis that is terminal. As his physical powers fail, Cary has to have a pen tied to his hand and his arm supported by a rope to write. Finally, he resorts to dictation until unable to speak, and then ceases writing for the first time since 1912. His last work, The Captive and the Free (1959), first volume of a projected trilogy on religion, is unfinished at his death on March 29, 1957. His short stories are collected in Spring Song (1960).