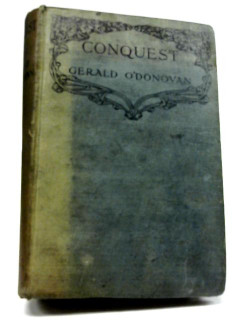 O’Donovan is the son of a pier builder. He attends Ardnaree College in Killala and St. Patrick’s College, Maynooth. He leaves Maynooth after ordination for the Diocese of Clonfert in 1895 and is appointed as a Roman Catholic priest to Loughrea, County Galway between 1896 and 1904. He is an enthusiastic advocate of the Gaelic League and the Irish Cooperative Association, and promotes his views in articles and lectures. His literary friends include Lady Gregory, W. B. Yeats and George Moore. He is in charge of decorating St. Brendan’s Cathedral, Loughrea in 1901, the financing provided by O’Donovan’s close friend Edward Martyn. He quit Loughrea in 1904 after the arrival of a new bishop, Thomas O’Dea.

O’Donovan moves to London but, failing to find work as a priest, he leaves the Catholic priesthood in May 1908. He becomes a subwarden at Toynbee Hall in the East End in March 1910. In October that year, he marries Florence Emily Beryl Verschoyle (1886–1968), the daughter of an Irish Protestant colonel fifteen years his junior. They have three children, two daughters and a son.

In 1913, O’Donovan publishes his first and best known novel, Father Ralph, which draws in large part on his own life. Around this time he changes his first name from Jeremiah to Gerald. Another novel titled Waiting is published in 1914. He joins the war effort in 1915, and rises to become head of the Italian section at the Ministry of Information in 1918. There he meets his secretary and future lover, English novelist Rose Macaulay.

O’Donovan publishes a few more novels after the war: How They Did It (1920), Conquest (1920), Vocations (1921), and The Holy Tree (1922). The clandestine affair with Macaulay continues for nearly two decades. In 1939, the pair are on holiday in the Lake District when they meet with a motoring accident, which damages O’Donovan’s health. He dies of cancer in Albury, Surrey three years later, on July 26, 1942. His letters to Macaulay had been destroyed the previous year when her flat in Central London was bombed during the Blitz.

In her novel The Towers of Trebizond, Macaulay features a woman character (Laurie) torn between her attraction to Christianity and her adulterous love for a married man. This is considered to reflect the author’s relationship with O’Donovan.