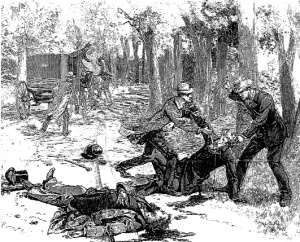 Lord Frederick Cavendish, newly appointed Chief Secretary for Ireland, and Thomas Henry Burke, the Permanent Undersecretary, are fatally stabbed in Phoenix Park, Dublin, on May 6, 1882 in what becomes known as the Phoenix Park Murders.

Cavendish, who is married to Lucy Cavendish, the niece of British Prime Minister William Ewart Gladstone, and has worked as Gladstone’s personal secretary, arrives in Ireland on the day he is murdered. Cavendish and Burke are attacked as they walk to the Viceregal Lodge, which is the out-of-season residence of the Lord Lieutenant of Ireland. Thomas Myles, resident surgeon at nearby Dr. Steevens’ Hospital, is summoned to render medical assistance to the victims. The then Lord Lieutenant, Lord Spencer, describes suddenly hearing screams, before witnessing a man running to the Lodge grounds shouting “Lord Frederick Cavendish and Mr. Burke are killed.” Responsibility for the assassinations is claimed by a small hitherto unheard-of Republican organisation called the Irish National Invincibles.

The hunt for the perpetrators is led by Superintendent John Mallon, a Catholic man from Armagh. Mallon has a pretty shrewd idea of who has committed the crime and suspects a number of former Fenian activists. A large number of suspects are arrested and kept in prison by claiming they are connected with other crimes. By playing one suspect against another, Mallon gets several of them to reveal what they know.

James Carey, leader of The Invincibles, Michael Kavanagh, and Joe Hanlon agree to testify against the others. Joe Brady, Michael Fagan, Thomas Caffrey, Dan Curley, and Tim Kelly are convicted of the murders and all are hanged by William Marwood in Kilmainham Gaol in Dublin between May 14 and June 9, 1883. Others, convicted as accessories to the crime, are sentenced to long prison terms. The getaway driver, James Fitzharris, is acquitted of murder but is retried as an accessory and convicted.

Only the case of Tim Kelly gives any real difficulty as he is only nineteen and generally said to look much younger. By referring to him as “a child” his defence counsel creates enough unease for two juries to disagree. He is found guilty only after an unprecedented third trial.

Charles Stewart Parnell makes a speech condemning the murders in 1882, which increases his already huge popularity in both Britain and Ireland. He has just enabled some reforms under the Kilmainham Treaty four days prior to the murders. Parnell’s reputation increases in Ireland, being seen as a more moderate reformer who would never excuse such tactics.

However, Parnell’s policy of allying his party to Gladstone’s Liberal Party in 1886 to enable Home Rule is also ultimately defeated by the murders. Gladstone’s Minister, Lord Hartington, is the elder brother of Lord Frederick Cavendish. Infuriated by the manner of his brother’s early death, Hartington splits with Gladstone on the Home Rule bills of 1886 and 1893 and leads the breakaway Liberal Unionist Association which allies itself to Lord Salisbury‘s conservative governments. In the ensuing 1886 general election, the Conservatives and Liberal Unionists sweep the board. This delays Home Rule by twenty-eight years, when the Third Irish Home Rule Bill is passed in 1914 but never effected.

In March 1887, The Times prints letters purportedly from Parnell claiming sympathy with the murderers and that his public denunciation of them was insincere. It emerges that the letters are forgeries written by journalist Richard Pigott. Parnell is personally vindicated by the Parnell Commission in 1888–89.