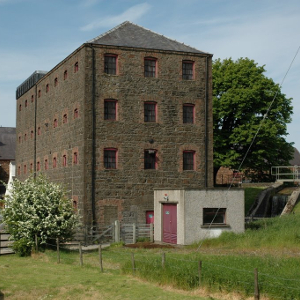 King James I grants a license to Sir Thomas Phillips, landowner and Governor of County Antrim, for the Old Bushmills distillery on April 20, 1608. The distillery is thought to date from at least 1276 making it the oldest distillery in the world.

The Bushmills Old Distillery Company itself is not established until 1784 by Hugh Anderson. Bushmills suffers many lean years with numerous periods of closure with no record of the distillery being in operation in the official records both in 1802 and in 1822. In 1860 a Belfast spirit merchant named Jame McColgan and Patrick Corrigan purchase the distillery and in 1880 they form a limited company. In 1885, the original Bushmills buildings are destroyed by fire but the distillery is quickly rebuilt. In 1890, the steamship SS Bushmills, owned and operated by the distillery, makes its maiden voyage across the Atlantic to deliver Bushmills whiskey to America. It calls at Philadelphia and New York City before heading on to Singapore, Hong Kong, Shanghai and Yokohama.

In the early 20th century, the United States is a very important market for Bushmills, as well as for other Irish Whiskey producers. American Prohibition in 1920 comes as a large blow to the Irish Whiskey industry, but Bushmills manages to survive. Wilson Boyd, Bushmills’ director at the time, predicts the end of prohibition and has large stores of whiskey ready to export. After the World War II, the distillery is purchased by Isaac Wolfson and, in 1972, it is taken over by Irish Distillers, meaning that Irish Distillers controls the production of all Irish whiskey at the time. In June 1988, Irish Distillers is bought by French liquor group Pernod Ricard.

In June 2005, the distillery is bought by Diageo for £200 million. Diageo announces a large advertising campaign in order to regain market share for Bushmills. 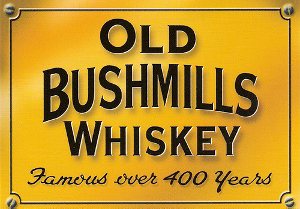 In May 2008, the Bank of Ireland issues a new series of sterling banknotes in Northern Ireland which all feature an illustration of the Old Bushmills Distillery on the obverse side, replacing the previous notes series which depicts Queen’s University Belfast.

In November 2014 it is announced that Diageo is to trade the Bushmills brand with Jose Cuervo in exchange for the 50% of the Don Julio brand of tequila that Diageo does not already own.

Some Bushmills offerings have performed well at international Spirits ratings competitions. In particular, its Black Bush Finest Blended Whiskey receives double gold medals at the 2007 and 2010 San Francisco World Spirits Competitions. It also receives a well-above-average score of 93 from the Beverage Testing Institute in 2008 and 2011.