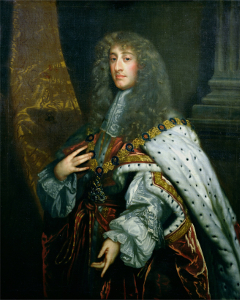 The coronation of James II as King of England and Ireland takes place at Westminster Abbey on April 23, 1685. He is also crowned King of Scotland as James VII. He is the last Roman Catholic monarch of England, Scotland and Ireland.

The second surviving son of Charles I, James ascends the throne upon the death of his brother, Charles II. There is little initial opposition to his accession, and there are widespread reports of public rejoicing at the orderly succession. The new Parliament that assembles in May 1685, which gains the name of “Loyal Parliament,” is initially favourable to James, and the new King sends word that even most of the former exclusionists will be forgiven if they acquiesce to his rule.

Members of Britain’s Protestant political elite increasingly suspect him of being pro-French and pro-Catholic and of having designs on becoming an absolute monarch. When he produces a Catholic heir, leading nobles call on his Protestant son-in-law and nephew William of Orange to land an invasion army from the Dutch Republic, which he does in the Glorious Revolution of 1688. James flees England and thus is held to have abdicated. He is replaced by his eldest, Protestant daughter Mary and her husband William of Orange.

James makes one serious attempt to recover his crowns from William and Mary when he lands in Ireland in 1689. After the defeat of the Jacobite forces by the Williamites at the Battle of the Boyne in July 1690, James returns to France. He lives out the rest of his life as a pretender at a court sponsored by his cousin and ally, King Louis XIV.

James is best known for his struggles with the English Parliament and his attempts to create religious liberty for English Roman Catholics and Protestant nonconformists, against the wishes of the Anglican establishment. This tension makes James’s four-year reign a struggle for supremacy between the English Parliament and the Crown, resulting in his deposition, the passage of the Bill of Rights, and the accession of his daughter and her husband as king and queen.