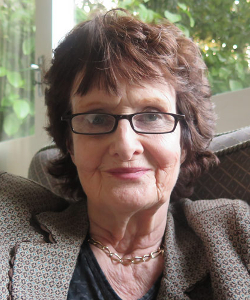 Eavan Boland, Irish poet, author and professor who has been active since the 1960s and helped develop feminist publishing company Arlen House, is born in Dublin on September 24, 1944. She is currently a professor at Stanford University, where she has taught since 1996. Her work deals with the Irish national identity and the role of women in Irish history. A number of poems from Boland’s poetry career are studied by Irish students who take the Leaving Certificate.

Boland’s father, Frederick Boland, is a career diplomat and her mother, Frances Kelly, is a noted post-expressionist painter. When she is six, her father is appointed Irish Ambassador to the United Kingdom. The family follows him to London, where she has her first experiences of anti-Irish sentiment. Her dealing with this hostility strengthens her identification with her Irish heritage. She speaks of this time in her poem “An Irish Childhood in England: 1951.”

At 14, she returns to Dublin to attend Holy Child School in Killiney. She publishes a pamphlet of poetry, 23 Poems, in her first year at Trinity College, Dublin in 1962. She earns a BA with First Class Honors in English Literature and Language from Trinity in 1966. Since then she has held numerous teaching positions and published poetry, prose criticism and essays. She marries the novelist Kevin Casey in 1969 and has two daughters. Her experiences as a wife and mother influence her to write about the centrality of the ordinary, as well as provide a frame for more political and historical themes.

Boland has taught at Trinity College, Dublin, University College Dublin, and Bowdoin College, and was a member of the International Writing Program at the University of Iowa. She was also writer in residence at Trinity College, Dublin, and at the National Maternity Hospital, Dublin. In the late 1970s and 1980s, she teaches at the School of Irish Studies in Dublin. Since 1996 she has been a tenured Professor of English at Stanford University where she is currently Bella Mabury and Eloise Mabury Knapp Professor in the Humanities and Melvin and Bill Lane Professor for Director of the Creative Writing program. She divides her time between Palo Alto, California and her home in Dublin.

In 2015, Boland says that Trinity College, Dublin not only “influenced her career,” but “determined her career.”