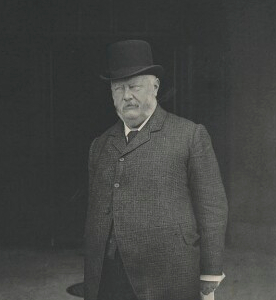 Captain John Philip Nolan, an Irish nationalist landowner and a supporter of home rule and tenant rights, defeats Conservative William Le Poer Trench on February 8, 1872 in a County Galway by-election. He serves in the House of Commons of the United Kingdom of Great Britain and Ireland and as member of the Irish Parliamentary Party representing Galway County (1872–1885) and Galway North (1885–1895, 1900–1906).

Nolan is the eldest son of John Nolan, Justice of the Peace, of Ballinderry, Tuam, and Mary Anne, Walter Nolan, of Loughboy. He receives his education at Clongowes Wood College, Stonyhurst, Trinity College, Dublin, the Staff College, Camberley and Woolwich. He enters the British Royal Artillery in 1857 and serves throughout the 1868 Expedition to Abyssinia. As adjutant to Colonel Milward, he is present at the capture of Amba Mariam (then known as Magdala) and is mentioned in despatches. He is awarded the Abyssinian War Medal and retires from the Army with the rank of lieutenant-colonel in 1881.

Nolan becomes involved in the nascent home rule campaign of the Home Rule League. On February 8, 1872 he is elected MP for Galway County in a by-election, defeating by a large majority the Conservative William Le Poer Trench. Of the 4,686 available electors, who are chiefly Catholic, 2,823 vote for Nolan and 658 for Trench.

Trench appeals the result, claiming on petition that there is widespread intimidation during the election campaign. The local Catholic bishops and clergy had strongly supported Nolan, chiefly because the family of his opponent, a Captain Trench, was active in proselytism. The trial of the Galway County Election Petition begins, before Judge William Keogh, on April 1 and ends on May 21, 1872.

Judge Keogh finds that Nolan had been elected by the undue influence and intimidation and in his report states that he found 36 persons guilty of undue influence and intimidation, including John MacHale, the Archbishop of Tuam, the Bishop of Clonfert, Patrick Duggan, and the Bishop of Galway, John McEvilly, and twenty nine named priests, such intimidation being in some cases exercised in the very churches. As a result, Nolan is unseated on June 13, with the seat going to Trench. The judgement causes an uproar. The judge is threatened with removal from the bench and his reputation never recovers.

Nolan retakes the seat at the 1874 election. He remains MP after the 1885 constituency reforms as MP for Galway North until 1895.

When the Irish Parliamentary Party splits over Charles Stewart Parnell‘s long-term family relationship with Katharine O’Shea, the separated wife of a fellow MP, Nolan sides with his deposed leader and seconds the motion to retain Parnell as chairman at the ill-fated party meeting in Committee Room 15 of the House of Commons. He goes on to become whip of the pro-Parnellite rump of the split party, the Irish National League. He loses the Galway North seat to an Anti-Parnellite, Denis Kilbride, in 1895 and stands unsuccessfully as a Parnellite for South Louth in 1896. He is re-elected unopposed at Galway North after the reunification of the Parliamentary Party in 1900, but loses the seat again for the final time in 1906 when he stands as an Independent Nationalist.