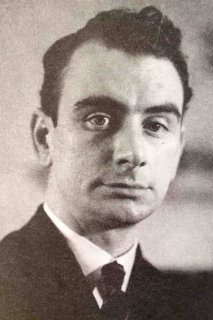 Denis Devlin, one of the major figures and influences of modern and modernist Irish poetry, dies in Dublin on August 21, 1959. Along with Samuel Beckett and Brian Coffey, he is one of the generation of Irish modernist poets to emerge at the end of the 1920s. He is also a career diplomat.

Devlin is born in Greenock, Scotland of Irish parents on April 15, 1908. His family returns to live in Dublin in 1918. He studies at Belvedere College and, from 1926, as a seminarian for the Roman Catholic priesthood at Clonliffe College. As part of his studies he attends a degree course in modern languages at University College Dublin (UCD), where he meets and befriends Brian Coffey. Together they publish a joint collection, Poems, in 1930.

In 1927, Devlin abandons the priesthood and leaves Clonliffe College. He graduates from UCD with his BA in 1930 and spends that summer on the Blasket Islands to improve his spoken Irish. Between 1930 and 1933, he studies literature at Ludwig Maximilian University of Munich and the University of Paris, meeting, amongst others, Beckett and Thomas MacGreevy. He then returns to UCD to complete his MA thesis on Michael de Montaigne.

Devlin joins the Irish Diplomatic Service in 1935 and spends a number of years in Rome, New York and Washington, D.C. During this time he meets the French poet Saint-John Perse, and the Americans Allen Tate and Robert Penn Warren. He goes on to publish a translation of Exile and Other Poems by Saint-John Perse, and Tate and Warren edit his posthumous Selected Poems.

Denis Devlin dies suddenly at the age of 51 in Dublin on August 21, 1959. Since his death, there have been two Collected Poems published; the first in 1964 is edited by Coffey and the second in 1989 by J.C.C. Mays.