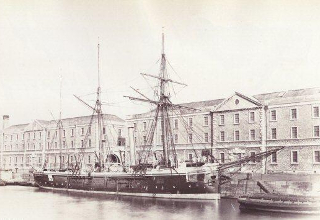 HMS Wasp, a composite screw Banterer-class gunboat of the Royal Navy, is wrecked off Tory Island, County Donegal on September 22, 1884 with the loss of 52 lives. There are six survivors.

The Banterer class is designed by Nathaniel Barnaby, the Admiralty Director of Naval Construction. The keel of the HMS Wasp is laid at Barrow Iron Shipbuilding as yard number 71 and she is launched on October 5, 1880. She is commissioned on December 1, 1881 and is rigged with three masts, making her a barquentine-rigged vessel.

On her final voyage, HMS Wasp, under the command of Lieutenant J.D. Nicholls, is sailing from Westport, County Mayo, in the West of Ireland, to Moville in Inishowen, County Donegal, in Ulster, to pick up a party of police, bailiffs and court officials. These are to be transported to Inishtrahull, an island off Malin Head, to carry out evictions for non-payment of rents. Ironically, the ship had delivered urgently needed supplies of seed potatoes to the same islanders the previous year.

In the early morning of September 22, 1884, HMS Wasp is near Tory Island. The weather is cloudy with occasional squalls and rain showers. The commanding officer and most of the crew are in their bunks. The lieutenant navigating the ship is relatively unfamiliar with the area in which the ship is sailing. At 3:55 AM HMS Wasp runs aground on a reef. The initial shock breaks the hull of the ship and she begins to rapidly fill with water. The commander orders the ship’s boats lowered but HMS Wasp hits the reefs again, sinking so quickly that the boats cannot be launched. HMS Wasp sinks within fifteen minutes. Six crewmen manage to cling to one of the gunboat’s spars and they wash ashore on Tory Island and are found by islanders. The other 52 crew aboard drown.

A court martial is held for the survivors. The finding is that the cause of the wreck was a lack of care taken with the vessel’s navigation, but the survivors are all exonerated. The wreck is sold to the Cornish Salvage Co. in November 1910.