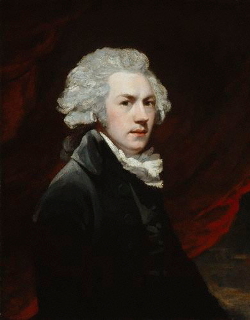 Sir Martin Archer Shee, portrait painter and president of the Royal Academy of Arts, is born in Dublin on December 23, 1769.

Shee is born into an old Irish Catholic family, the son of Martin Shee, a merchant, who regards the profession of a painter as an unsuitable occupation for a descendant of the Shees. He nevertheless studies art in the Royal Dublin Society and comes to London. There, in 1788, he is introduced by Edmund Burke to Joshua Reynolds, on whose advice he studies in the schools of the Royal Academy of Arts.

In 1789 Shee exhibits his first two pictures, the “Head of an Old Man” and “Portrait of a Gentleman.” Over the next ten years he steadily increases in practice. In 1798 he is chosen an associate of the Royal Academy and in 1800 he is elected a Royal Academician. He moves to George Romney‘s former house at 32 Cavendish Square and sets up as his successor.

Shee continues to paint with great readiness of hand and fertility of invention, although his portraits are eclipsed by more than one of his contemporaries, and especially by Thomas Lawrence. His earlier portraits are carefully finished, easy in action, with good drawing and excellent discrimination of character. They show an undue tendency to redness in the flesh painting, a defect which is still more apparent in his later works, in which the handling is less square, crisp and forcible. In addition to his portraits, he executes various subjects and historical works, such as Lavinia, Belisarius, his diploma picture “Prospero and Miranda,” and the “Daughter of Jephthah.”

In 1805 Shee publishes a poem consisting of Rhymes on Art, and a second part follows in 1809. Lord Byron speaks well of it in his English Bards and Scotch Reviewers. He publishes another small volume of verse in 1814, entitled The Commemoration of Sir Joshua Reynolds, and other Poems, but this is less successful. He also produces a tragedy, Alasco, set in Poland. The play is accepted at Covent Garden, but is refused a licence, on the grounds that it contains treasonable allusions, and Shee angrily resolves to make his appeal to the public. He carries out his threat in 1824, but Alasco is still on the list of unacted dramas in 1911. He also publishes two novels – Oldcourt (1829, in three volumes) and Cecil Hyde (1834).

On the death of Sir Thomas Lawrence in 1830, Shee is chosen president of the Royal Academy in his stead and shortly afterwards receives a knighthood. In 1831 he is elected a Fellow of the Royal Society. In an examination before the parliamentary committee of 1836 concerning the functions of the Royal Academy, he ably defends its rights. He continues to paint until 1845, when illness makes him retire to Brighton. He is deputised for at the Academy by J. M. W. Turner, who had appointed him a trustee of the projected Turner almshouse.

From 1842–1849, Shee is the first president of the Royal Birmingham Society of Artists.

Martin Archer Shee dies in Brighton, Sussex, England on August 13, 1850 and is buried in the western extension to St. Nicholas’ Churchyard in Brighton. His headstone remains but has been laid flat and moved to the perimeter of the site.