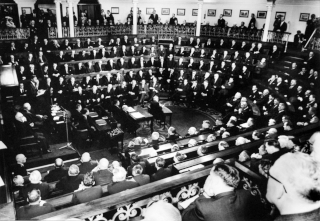 United States President John F. Kennedy addresses a joint session of Houses of the Oireachtas in Dublin on June 28, 1963, on the third day of his Irish visit. It follows a visit earlier in the day to Cork where he is greeted like a rock star.

Kennedy makes a surprising mistake when speaking to a packed Dáil Éireann about one of the most momentous days for the Irish Brigade during the American Civil War. Somehow, Kennedy gets his dates and geography mixed up when he says, “The 13th day of September, 1862, will be a day long remembered in American history. At Fredericksburg, Maryland, thousands of men fought and died on one of the bloodiest battlefields of the American Civil War.” The date of the Battle of Fredericksburg where so many Irish are slaughtered is December 13 rather than September 13 as Kennedy states. Also, Fredericksburg is in Virginia and not Maryland.

Kennedy is accompanied on this European trip, which includes the famous Ich bin ein Berliner, speech by his counselor and speech writer Ted Sorensen, a master wordsmith and fastidious researcher who seems to have erred in the writing of the speech. It is unlikely that Kennedy mispronounced “December” as the transcript of the speech at the John F. Kennedy Presidential Library and Museum includes the incorrect dates. No one in Dáil Éireann appears to notice Kennedy’s error.

Aside from this mistake, the speech is uplifting and motivating to an Irish nation that is still young. Kennedy says:

This is an extraordinary country. George Bernard Shaw, speaking as an Irishman, summed up an approach to life: Other people, he said “see things and . . . say ‘Why?’ . . . But I dream things that never were – and I say: ‘Why not?’” ”

The complete audio version of Kennedy’s speech can be heard on the John F. Kennedy Presidential Library and Museum website.