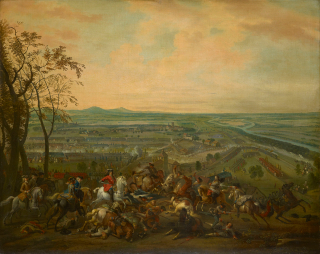 The Irish Brigade of France fights at the Battle of Luzzara in Lombardy on August 15, 1702 during the War of the Spanish Succession, a battle between a largely French and Savoyard army led by Louis Joseph, Duke of Vendôme and an Imperial force under Prince Eugene of Savoy.

Control of the Duchies of Milan and Mantua is the main strategic prize in Northern Italy as they are key to the security of Austria‘s southern border. In May, an Austrian army under Prince Eugene of Savoy enters Northern Italy and wins a series of victories which by February 1702 forces the French behind the Adda river.

In early August, Vendôme’s army stops at the Austrian-held town of Luzzara on the right bank of the Po River. The total French force is around 30,000-35,000, including 10,000 Savoyards and five regiments of the Irish Brigade.

Eugene lifts his blockade of Mantua since these moves threaten to cut him off from his supply bases at Modena and Mirandola. Taking all available forces, around 26,000 men, he marches to intercept the French at Luzzara but arrives too late to prevent its surrender and establishes his headquarters at the village of Riva, north of the French positions.

Just above Luzzara, the sides of the Seraglo to Rovero canal have been built up to prevent the Po River flooding the countryside. Eugene plans to use these to conceal his movements and attack the French as they enter their camp. He splits his forces into two lines, the left wing under General Visconti, the right under Charles Thomas, Prince of Vaudémont and himself in charge of the centre.

During the morning and early afternoon of August 15, the Imperialists cross the Po River and manage to achieve a large measure of surprise in surrounding the French camp but are discovered shortly before completing this operation. Around 5:00 PM, Prince Eugene orders a general assault. The French are taken by surprise, some units marching into the camp and immediately out again to the front line but quickly recover. Eugene’s right wing is repulsed no less than four times, while the struggle on the left is equally bloody, his Danish mercenaries nearly break through on several occasions. The French line manages to hold until sheer exhaustion and darkness end the fighting around midnight.

Casualties on both sides are heavy, particularly among the Irish units and Albemarle’s Regiment on the right. During the night, Eugene entrenches his position and the French do not resume the attack the following morning.

The overall result is a draw, although in the practice of the times Eugene claims it as a victory, since he remains in possession of the ground. However, his forces are too weak to intervene as the French continue to take strongpoints. The two armies lay facing each other until early November, when both move into winter quarters.

Eugene is recalled to Vienna in January 1703 to take over as head of the Imperial War Council, while Vendôme continues preparations for the summer campaign. In October 1703, Victor Amadeus II of Sardinia, Duke of Savoy defects to the Alliance and Vendôme spends the next three years in Savoy.

In 1708 Prince Eugene commissions a series of paintings recording his victories from Dutch artist Jan van Huchtenburg, one being Luzzara which gives an indication of how he viewed it.

(Pictured: “The Battle of Luzzara, 1702,” oil on canvas by Jan van Huchtenburgh)