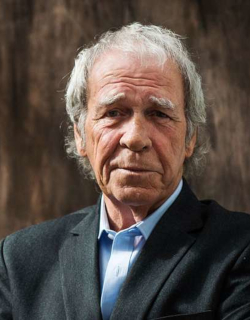 Finbar Furey, multi-instrumental Irish folk musician, is born in Ballyfermot, Dublin on September 28, 1946. He is best known for his band of brothers, The Fureys.

Furey’s well-known musician father, Ted, starts him on the Uilleann pipes while he is very young. By his teens, he has won three All Ireland Medals, The Oireachtas, and many Feisanna. He is the only piper to win the All Ireland, the Oireachtas medal and the four province titles in the same year. He is also an Irish Traveller.

Furey popularizes the pipes worldwide while on tour with his brother Eddie in the 1960s. In 1969, he and Eddie begin touring as backup musicians for the influential Irish folk group, The Clancy Brothers. He plays the pipes, as well as the banjo, tin whistle, and guitar with the group in live performances, on television, and on recordings. The Furey brothers leave the group the following year and begin performing as a duo again. They are awarded Single of the Year by John Peel in 1972.

When younger brothers Paul and George join the band several years later, The Fureys enjoy hits including When You Were Sweet Sixteen, Tara Hill, Green Fields of France, Red Rose Café and The Lonesome Boatman. In Britain, they become one of the first Irish folk groups to play on Top of the Pops.

In 1997, after nearly thirty years as The Fureys’ front man, Furey decides the time is right to follow his own path as a singer songwriter. He decides to step aside and pursue his solo career, to present his definitive one-man show and to explore new pastures as a singer, producer and writer.

In the early 2000s, Furey begins an acting career. His first appearance is in the Martin Scorsese film Gangs of New York. He also appears in Adam & Paul (2004), Strength and Honour (2007), short Paris Sexy (2010), and the RTÉ Television series Love/Hate.

In 2011 Furey releases the album Colours on Dolphin Music. The album features guest performances from Mary Black and Shayne Ward and is released in North America in 2012 on the Valley Entertainment record label.

In August 2013, Furey appears on the Irish television show The Hit. He records a single pitched by a songwriter, Gerry Fleming. The single, “The Last Great Love Song”, charts at number one in the Irish charts against Mundy‘s song “Jigsaw Man” written by Mark Walsh which charts at number five. The song is performed again with the RTÉ Concert Orchestra in the final and comes in first place in the public vote earning the title “The Ultimate Hit.”