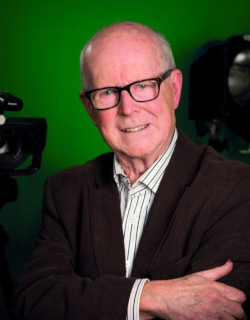 On February 26, 1978, film critic Ciaran Carty hails the Irish language film Poitín for its deromanticization of the west.

Poitín is partially conceived as a response to The Quiet Man, also set in the coastal area of Connemara, and its sentimental portrayal of the Irish landscape. Poitín tells of a small community centered on a home-distiller of Irish moonshine whiskey, or poteen.

In Gaelic dialogue, using local actors, with Cyril Cusack as the moonshiner, it shifts between a humorous, whimsical account of two men’s bumbling attempts at theft and a harsh series of revenges. Director Bob Quinn, a strong advocate of Gaelic culture, calls it “a horror story told amusingly.” Carty suggests that Quinn “implicitly deromanticizes the Robert Flaherty image of the rugged West as a place of primal dignity where man does noble battle with the elements.”

Since incurring the wrath of his first editor in 1960 by making Alfred Hitchcock’s Psycho his film of the year, Carty has consistently championed the arts, developing a career as one of Ireland’s leading critics and broadcasters. He serves as deputy editor of the Sunday Independent (1961–65) before becoming arts editor for the Sunday Tribune (1985–2011). Since 1988 he has edited the New Irish Writing page for both the Tribune and the Irish Independent, and is curator of the prestigious annual Hennessy Literary Awards. He is the author of Confessions of a Sewer Rat (1995), a two-volume biography of the artist Robert Ballagh (1985, 2011), and has co-edited, with Dermot Bolger, two anthologies of Hennessy fiction (1995, 2006).