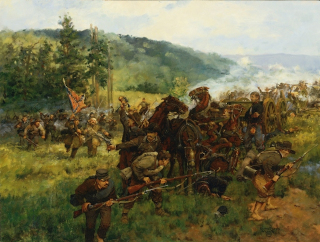 As part of Confederate States Army Maj. Gen. Thomas J. “Stonewall” Jackson‘s campaign through the Shenandoah Valley, the Irish 6th Louisiana fight in the Battle of Port Republic in Rockingham County, Virginia on June 9, 1862 during the American Civil War. The battle is a fierce contest between two equally determined foes and is the most costly battle fought by Jackson’s Army of the Valley during its campaign.

During the night of June 8–9, 1862, Brig. Gen. Charles S. Winder‘s Stonewall Brigade is withdrawn from its forward position near Bogota, a large house owned by Gabriel Jones, and rejoins Jackson’s division at Port Republic. Winder’s brigade is assigned the task of spearheading the assault against Union Army forces east of the river. Brig. Gen. Isaac R. Trimble‘s brigade and elements of Col. John M. Patton, Jr.’s, are left to delay Maj. Gen. John C. Frémont‘s Union forces at Cross Keys, while the rest of Maj. Gen. Richard S. Ewell‘s division march to Port Republic to be in position to support Winder’s attack.

Brig. Gen. Erastus B. Tyler‘s brigade joins Col. Samuel S. Carroll‘s brigade north of Lewiston on the Luray Road. The rest of Brig. Gen. James Shields‘s (a native of County Tyrone) division is strung out along the muddy roads back to Luray. General Tyler, in command on the field, advances at dawn on June 9 to the vicinity of Lewiston. He anchors the left of his line on a battery positioned on the Lewiston Coaling, extending his infantry west along Lewiston Lane to the South Fork near the site of Lewis’s Mill. The right and center are supported by artillery, 16 guns in all.

Winder’s brigade crosses the river by 5:00 AM and deploys to attack east across the bottomland. He sends two regiments, the 2nd Virginia Infantry and 4th Virginia Infantry, into the woods to flank the Union line and assault the Coaling. When the main Confederate battle line advances, it comes under heavy fire from the Union artillery and is soon pinned down. Confederate batteries are brought forward onto the plain but are outgunned and forced to seek safer positions. Ewell’s brigades are hurried forward to cross the river. Seeing the strength of the Union artillery at the Coaling, Jackson sends Richard Taylor‘s brigade, including the famed Louisiana Tigers, to the right into the woods to support the flanking column that is attempting to advance through the thick underbrush.

Winder’s brigade renews its assault on the Union right and center, taking heavy casualties. General Tyler moves two regiments from the Coaling to his right and launches a counterattack, driving Confederate forces back nearly half a mile. While this is occurring, the first Confederate regiments probe the defenses of the Coaling, but are repulsed.

Finding resistance fiercer than anticipated, Jackson orders the last of Ewell’s forces still north of Port Republic to cross the rivers and burn the North Fork bridge. These reinforcements begin to reach Winder, strengthening his line and stopping the Union counterattack. Taylor’s brigade reaches a position in the woods across from the Coaling and launches a fierce attack, which carries the hill, capturing five guns. Tyler immediately responds with a counterattack, using his reserves. These regiments, in hand-to-hand fighting, retake the position. Taylor shifts a regiment to the far right to outflank the Union battle line. The Confederate attack again surges forward to capture the Coaling. Five captured guns are turned against the rest of the Union line. With the loss of the Coaling, the Union position along Lewiston Lane becomes untenable, and Tyler orders a withdrawal about 10:30 AM. Jackson orders a general advance.

William B. Taliaferro‘s fresh Confederate brigade arrives from Port Republic and presses the retreating Federals for several miles north along the Luray Road, taking several hundred prisoners. The Confederate army is left in possession of the field. Shortly after noon, Frémont’s army begins to deploy on the west bank of the South Fork, too late to aid Tyler’s defeated command, and watches helplessly from across the rain-swollen river. Frémont deploys artillery on the high bluffs to harass the Confederate forces. Jackson gradually withdraws along a narrow road through the woods and concentrates his army in the vicinity of Mt. Vernon Furnace. Jackson expects Frémont to cross the river and attack him on the following day, but during the night Frémont withdraws toward Harrisonburg.

Together, the Battles of Cross Keys and Port Republic are the decisive victories in Jackson’s Valley campaign, forcing the Union armies to retreat and leaving Jackson in control of the upper and middle Shenandoah Valley and free to reinforce Gen. Robert E. Lee for the Seven Days Battles outside Richmond, Virginia.

The Civil War Trust, a division of the American Battlefield Trust, and its partners have acquired and preserved 947 acres of the Port Republic battlefield in seven transactions since 1988. The battlefield is located about three miles east of Port Republic at U.S. Route 340 and Ore Bank Road. It retains its wartime agrarian appearance. The Port Republic Battle Monument is on Ore Bank Road beside the site of The Coaling, a key battlefield feature. The Coaling is the first land acquisition of the modern Civil War battlefield preservation movement. The 8.55-acre site is donated to the Trust’s forerunner, the Association for the Preservation of Civil War Sites by the Lee-Jackson Foundation in 1988.