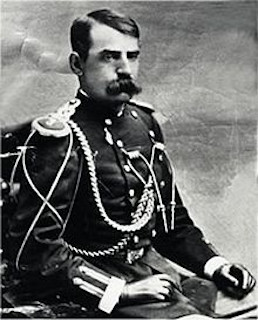 John Gregory Bourke, a captain in the United States Army and a prolific diarist and postbellum author, dies in Philadelphia, Pennsylvania on June 8, 1896. He writes several books about the American Old West, including ethnologies of its indigenous peoplesindigenous peoples.

Bourke is born in Philadelphia on June 23, 1846 to Irish immigrant parents, Edward Joseph and Anna (Morton) Bourke. His early education is extensive and includes Latin, Greek, and Gaelic. When the American Civil War begins, Bourke is fourteen. At sixteen he runs away from home. Claiming to be nineteen, he enlists in the 15th Regiment Pennsylvania Volunteer Cavalry, in which he serves until July 1865. He receives a Medal of Honor for “gallantry in action” at the Battle of Stones River, Tennessee, in December 1862. He later sees action at the Battle of Chickamauga.

Based on his service during the war, Bourke’s commander, Major General George Henry Thomas, nominates him for the United States Military Academy at West Point, New York. He is appointed cadet in the Academy on October 17, 1865. He graduates on June 15, 1869, and is assigned as a second lieutenant in the 3rd Cavalry Regiment. He serves with his regiment at Fort Craig, New Mexico Territory, from September 29, 1869 to February 19, 1870.

Bourke serves as an aide to General George Crook in the Apache Wars from 1872 to 1883. As Crook’s aide, he has the opportunity to witness every facet of life in the Old West — the battles, wildlife, the internal squabbling among the military, the Indian Agency, settlers, and Native Americans.

During his time as aide to General Crook during the Apache Wars, Bourke keeps journals of his observations that are later published as On the Border with Crook. This book is considered one of the best firsthand accounts of frontier army life, as Bourke gives equal time to both the soldier and the Native American. Within it, he describes the landscape, Army life on long campaigns, and his observations of the Native Americans. His passages recount General Crook’s meetings with Sitting Bull, Crazy Horse, and Geronimo as the General attempts to sign peace treaties and relocate tribes to reservations. He provides considerable detail of towns and their citizens in the Southwest, specifically the Arizona Territory.

In 1881 Bourke is a guest of the Zuni tribe, where he is allowed to attend the ceremony of a Newekwe priest. His report of this experience is published in 1888 as The use of human odure and human urine in rites of a religious or semi religious character among various nations.

Bourke marries Mary F. Horbach of Omaha, Nebraska, on July 25, 1883. They have three daughters together.

John Bourke dies in the Polyclinic Hospital in Philadelphia on June 8, 1896, and is buried at Arlington National Cemetery. His wife is buried beside him after her death.