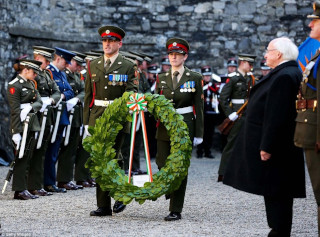 President Michael D. Higgins and Taoiseach Leo Varadkar lead the ceremony to mark the National Day of Commemoration at the Royal Hospital Kilmainham in Kilmainham, Dublin on July 9, 2017. The event is a multi-faith service of prayer and a military service honouring all Irish people who died in past wars or on service with the United Nations. Events are also held in Cork, Galway, Limerick, Sligo, Kilkenny and Waterford.

The National Day of Commemoration is held on the Sunday closest to July 11, the anniversary of the date the truce was signed in 1921 to end the Irish War of Independence.

Leaders from Christian, Coptic Christian, Jewish and Islamic denominations read or sing prayers and readings, and President Higgins lays a laurel wreath. The service is observed by more than 1,000 guests, including Government Ministers, the Council of State, which advises the Taoiseach, members of the judiciary, members of the diplomatic corps, TDs and Senators, representatives of ex-servicemen’s organisations and relatives of the leaders of the 1916 Easter Rising.

The national flag is lowered to half-mast while the “Last Post” and “Reveille” are sounded. After a minute of silence, a gun salute is sounded and the flag is raised again before the national anthem is played with a fly-by by three Pilatus PC-9 aircraft.

The Army band of the 1st Brigade and pipers play music including “Limerick’s Lament” and “A Celtic Lament” as guests arrive at the quadrangle of the former British Army veterans’ hospital, now the Irish Museum of Modern Art.

The prayer service begins with Imam Sheikh Hussein Halawa of the Islamic Cultural Centre of Ireland, father of Ibrahim Halawa, who is in prison in Cairo, singing verses from the Quran in Arabic and praying in English, “I ask Allah, the Mighty, the Lord, to bless our country, Ireland, and give the people of our country a zeal for justice and strength for forbearance.”

Soloist Sharon Lyons sings hymns between prayers and readings from all denominations, ending with Rabbi Zalman Lent: “May the efforts and sacrifice of those we honour today be transformed into the blessing of people throughout the world.”

Speaking to reporters, Chief of Staff of the Defence Forces Vice Admiral Mark Mellett says more than 650 personnel are serving in eleven countries and on the Mediterranean Sea. “In the Defence Forces we have over 80 people who have given their lives in the cause of peace internationally, and I think it’s a sign of a State that recognises those who give this service,” he says. “The military of our State serve the political and serve the people. And it’s this loyalty to the State which is actually critical, and I’m delighted that we have a day like this.”

Mellett’s views are echoed by former sergeant Denis Barry, who says 47 Irish soldiers died in Lebanon and it is important to pay respects for that sacrifice. “None of us who served ever thought we would see the day we could travel in Lebanon without weapons, heavy armaments or flak jackets.” That United Nations mission paid off, he says.

Former British soldier Ron Hammond says the event reflects positive developments, such as the creation of the veterans’ Union of British and Irish Forces. He served from 1960 to 1980 in the Royal Irish Fusiliers and Royal Irish Rangers, spending time in Germany, Canada, Yemen and north and south Africa. He joined the British rather than the Irish forces because at the time “a home posting in the Defence Forces was Collins Barracks and an overseas posting was the Curragh encampment.”