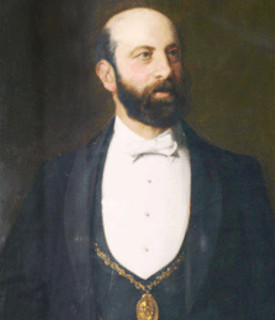 Jaffe is born into a Jewish family, one of four boys and five girls born to Daniel Joseph and Frederiké Jaffe. In 1852, his parents bring their family to Belfast. His father, along with his older brothers, Martin, John and Alfred, set up a business exporting linen. He is educated at Mr. Tate’s school in Holywood, County Down, and later in Hamburg and Switzerland.

From 1867 to 1877 Jaffe lives and works in New York. In 1877, his brothers retire so he returns to Belfast to head the family business, The Jaffe Brothers, at Bedford Street. He builds it up to become the largest linen exporter in Ireland. He is a member of the Belfast Harbour Commission and becomes a naturalised citizen in 1888. In 1894, he successfully agitates for the reporting and destruction of shipwrecks in the North Atlantic Ocean.

Jaffe is a Justice of the Peace, a governor of the Royal Hospital, a member of the Irish Technical Education Board and a member of the Senate of Queen’s College, which later becomes Queen’s University Belfast. He is the German consul in Belfast. He is an active member of the committee which gets the Public Libraries Act extended to Belfast, leading to the first free library being established there. In 1910 he erects the Jaffe Spinning Mill on the Newtownards Road, also known as Strand Spinning. This provides work for 350 people, rising to 650 in 1914 when the company expands to make munitions. He is lavishly charitable and contributes to Queen’s College.

Jaffe takes a keen interest in the Jewish community of Belfast. He is life-president of the Belfast Hebrew Congregation, which worships at the Great Victoria Street, Belfast synagogue. His father established it on July 7, 1871. Between 1871 and 1903 the congregation increases from fifty-five to over a thousand. He pays most of the £4,000 cost of building the synagogue in Annesley Street. He opens it in 1904 wearing his mayoral regalia. Three years later with his wife, they set up the Jaffe Public Elementary School on the Cliftonville Road.

Jaffe is a member of the Irish Unionist Party. He represents St. Anne’s Ward for the Belfast Corporation in 1894 and is elected Lord Mayor of Belfast in 1899. As mayor, he launchs an appeal for the dependants of soldiers fighting in the Second Boer War. On March 5, 1900, he is knighted at Dublin Castle by George Cadogan, 5th Earl Cadogan, Lord Lieutenant of Ireland. In 1901 he is High Sheriff of Belfast and in 1904 is again elected Lord Mayor.

The outbreak of war sees anti-German sentiment and when the RMS Lusitania passenger liner is torpedoed by a German U-boat of the coast of County Cork on May 7, 1915, resulting in the death of 1,000 people, anti-German feeling in Britain and Ireland rise to breaking point. Even though he is loyal to the Crown, and his eldest son Arthur and his nephew are serving in the British Army, Jaffe is accused of being a German spy. Society women refuse support for the Children’s Hospital so long as Jaffe and his wife remain on the board. He is “overwhelmed with pain and sorrow.”

After twenty-five years of service, Jaffe resigns his post as Alderman of Windsor Ward for Belfast City Council in June 1916 when he is almost 70 years of age and takes up residence in London, where he dies on April 29, 1929. Lady Jaffe is too ill to attend his funeral and she dies a few months later, in August 1929.