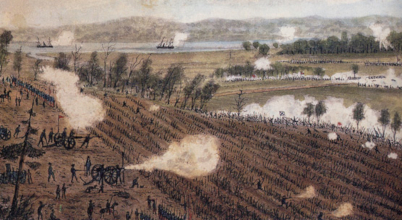 Irish take up arms against each other in the American Civil War as the Irish Brigade of the Union Army and the Confederate 6th Regiment, Louisiana Infantry take part in the Battle of Malvern Hill on July 1, 1862.

Also known as the Battle of Poindexter’s Farm, the Battle of Malvern Hill is fought between the Confederate Army of Northern Virginia, led by General Robert E. Lee, and the Union Army of the Potomac under Major General George B. McClellan. It is the final battle of the Seven Days Battles, taking place on a 130-foot elevation of land known as Malvern Hill, near the Confederate capital of Richmond, Virginia and just one mile from the James River. Including inactive reserves, more than fifty thousand soldiers from each side take part, using more than two hundred pieces of artillery and three warships.

The Seven Days Battles are the climax of the Peninsula Campaign, during which McClellan’s Army of the Potomac sails around the Confederate lines, lands at the tip of the Virginia Peninsula, southeast of Richmond, and strikes inland towards the Confederate capital. Confederate commander-in-chief Joseph E. Johnston fends off McClellan’s repeated attempts to take the city, slowing Union progress on the peninsula to a crawl. When Johnston is wounded, Lee takes command and launches a series of counterattacks, collectively called the Seven Days Battles. These attacks culminate in the action on Malvern Hill.

The Union’s V Corps, commanded by Brigadier General Fitz John Porter, takes up positions on the hill on June 30. McClellan is not present for the initial exchanges of the battle, having boarded the ironclad USS Galena and sailed down the James River to inspect Harrison’s Landing, where he intends to locate the base for his army. Confederate preparations are hindered by several mishaps. Bad maps and faulty guides cause Confederate Major General John B. Magruder to be late for the battle, an excess of caution delays Major General Benjamin Huger, and Major General Stonewall Jackson has problems collecting the Confederate artillery.

The battle occurs in stages: an initial exchange of artillery fire, a minor charge by Confederate Brigadier General Lewis Armistead, and three successive waves of Confederate infantry charges triggered by unclear orders from Lee and the actions of Major Generals Magruder and Daniel Harvey Hill, respectively. In each phase, the effectiveness of the Federal artillery is the deciding factor, repulsing attack after attack, resulting in a tactical Union victory.

After the battle, McClellan and his forces withdraw from Malvern Hill to Harrison’s Landing, where he remains until August 16. His plan to capture Richmond has been thwarted. In the course of four hours, a series of blunders in planning and communication had caused Lee’s forces to launch three failed frontal infantry assaults across hundreds of yards of open ground, unsupported by Confederate artillery, charging toward firmly entrenched Union infantry and artillery defenses. These errors provide Union forces with an opportunity to inflict heavy casualties.

The human toll of the Battle of Malvern Hill and the Seven Days Battles is shown clearly as both capitals, Washington and Richmond, set up numerous provisional hospitals to care for the dead and wounded. Ships sails from the Peninsula to Washington carrying the wounded. Richmond is nearest to the battlefields of the Seven Days, and the immense number of casualties overwhelms hospitals and doctors. People from about the Confederacy descend upon Richmond to care for the conflict’s casualties. Graves cannot be dug quickly enough. In total, the Confederacy counts some 5,650 casualties while the Union Army estimates approximately 3,000 casualties.

In the aftermath of the battle the Confederate press heralds Lee as the savior of Richmond. In stark contrast, McClellan is accused of being absent from the battlefield, a harsh criticism that haunts him when he runs for president in 1864.

(Pictured: A watercolor painting of the Battle of Malvern Hill, made by Robert Sneden during the American Civil War at Malvern Hill in Henrico County, Virginia. Sneden was the mapmaker for Samuel P. Heintzelman’s III Corps.) 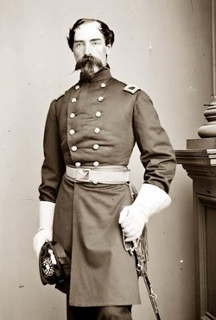 Brigadier General Robert Nugent, Irish-born American United States Army officer during the American Civil War and the American Indian Wars, is born on June 27, 1824 in Kilkeel, County Down, in what is now Northern Ireland.

Nugent serves with the Irish Brigade‘s 69th Infantry Regiment, from its days as a National Guard unit and into its incorporation into the Union Army at the start of the war. He is one of its senior officers at the First Battle of Bull Run.

When the unit is originally mustered out of service, the 90-day enlistment terms having expired, Nugent accepts a commission as a captain in the regular army. He is immediately assigned to the 13th Infantry Regiment whose commanding officer, Colonel William Tecumseh Sherman, personally requests. Taking a leave of absence to return to New York, he assists Thomas Francis Meagher in organizing the Irish Brigade. The newly reformed 69th Infantry Regiment is the first unit assigned to the Irish Brigade and, with Nugent as its colonel, he leads the “Fighting 69th” at the Battles of Fair Oaks, Gaines’s Mill, Savage’s Station, White Oak Swamp, Glendale and Malvern Hill.

Nugent is shot in the stomach at the Battle of Fredericksburg and is eventually forced to resign his command. He is appointed acting assistant provost marshal for the southern district of New York, which includes New York City and Long Island, by the United States War Department. An Irishman and Democrat, his appointment is thought to assure the Irish American population that conscription efforts would be carried out fairly. The Irish American, a popular Irish language newspaper, writes that the selection is a “wise and deservedly popular one.” He encounters resistance from city officials wanting to remain uninvolved, however by mid-June reports to his superior officer and provost marshal general Colonel James Barnet Fry that conscription efforts are “nearing completion without serious incident.”

Understanding the seriousness of the situation, Nugent attempts to keep the draft selections quiet and in isolated parts of the city. In Manhattan however, lotteries are placed in the heart of Irish tenement and shanty neighborhoods where the draft is most opposed.

In the ensuing New York City draft riots, Nugent takes command of troops and attempts to defend the city against the rioters. Despite issuing the cancellation of the draft, the riots continue for almost a week. His home on West 86th Street is looted and burned by the rioters during that time, his wife and children barely escaping from their home. Upon breaking into his house, furniture is destroyed and paintings of Nugent and Meagher are slashed, although a painting of Brigadier General Michael Corcoran is reportedly left untouched.

On October 28, Nugent is relieved of his post and succeeded by General William Hays. Returning to active duty, he assumes command of the Irish Brigade in November 1864, shortly after the death of Corcoran. He is present at the battle of Battle of Spotsylvania Court House, the Siege of Petersburg and the Appomattox Campaign. As its last commanding officer, he and the Irish Brigade also march in the victory parade held in Washington, D.C. following Robert E. Lee‘s surrender at Appomattox Court House.

Nugent is brevetted Brigadier General for distinguished leadership of the 69th Regiment on March 13, 1865. The veterans of the Irish Brigade are honorably discharged and mustered out three months later. Nugent remains in the regular U.S. Army for the next twenty years, a formidable “Indian fighter” during the American Indian Wars with the 13th and 24th Infantry Regiments. In 1879, he retires at the rank of major and resides in New York where he is involved in the Grand Army of the Republic, the War Veterans’ Association of the 7th Regiment and an honorary member of The Old Guard.

Nugent becomes ill in his old age, complications arising from his wounds suffered at Fredericksburg, and remains bedridden for two months before his death at his McDonough Street home in Brooklyn on June 20, 1901. In accordance with his last wishes, he is buried at Cypress Hills National Cemetery.