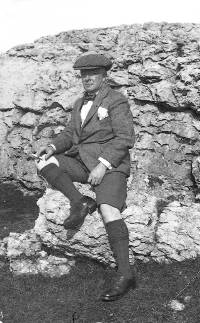 He begins his medical career in the County Infirmary in Galway, and then moves to Holles Street Hospital. He joins the Royal Army Medical Corps and is badly affected by mustard gas in India. After the war he settles in Leicester, where he spends the rest of his career as a neurological specialist.

Colahan is also a composer of popular songs. He is a quiet man who is often homesick for his beloved Galway Bay. These feelings lead him to write his most famous work, “Galway Bay.” Popularised by Bing Crosby, it becomes the biggest selling record of all time at one point. Theories abound as to where the song is written or where it is first heard. Some say it is in the home of Dr. Morris at 1 Montpelier Terrace, while others believe it is in The Vicars Croft on Taylor’s Hill, from where one can see Galway Bay.

Other songs written by Colahan include “Maccushla Mine,” “Asthoreen Bawn,” “Until God’s Day,” “The Kylemore Pass” and “The Claddagh Ring.” Sadly, before his music is selling in the High Street he dies on September 15, 1952, and is buried in an unmarked grave back in his Irish birthplace.

The Battle of Moira, known archaically as the Battle of Magh Rath, is fought on June 24, 637, near the Woods of Killultagh, just outside the village of Moira in what becomes County Down. The battle pits the Gaelic High King of Ireland Domnall II against his foster son King Congal of Ulster, supported by his ally Domnall the Freckled (Domnall Brecc) of Dál Riata.

The battle is allegedly the largest battle ever fought on the island of Ireland, and results in the death of Congal and the retreat of Domnall Brecc. The battle is caused as a result of the invading Gaels spreading out from Galway Bay. The Gaels have fled France and Spain to escape the Roman invasion of those areas. The Gaels are later to be known as Irish but are not native to the island. The native people of Ulster have been pushed into an area the size of two counties in what is now Antrim and Down.

Congal first establishes his power base in Dál nAraidi, where he becomes King before being recognised as King of Ulster in 627. His ambitions soon come into conflict with Domnall II, who becomes High King of Ireland in 628. Ironically, Domnall II rises to such a position because Congal has defeated and killed the previous High King, Suibne Menn, in a previous battle.

Domnall continues to press the rivalry with Congal very quickly. In 629 the two kings engage each other at the Battle of Dún Ceithirn in what is now County Londonderry. On that occasion Congal is defeated and Domnall is left unchallenged as the High King.

Throughout the 630s, Domnall continues to wage war on his rivals in the Uí Néill clan. In 637, however, Congal once again rises to challenge the Ard Rí, and enlists the help of Dál Riata to do so. The two forces meet just east of Lough Neagh.

Little is known about the actual battle itself. The armies of both Domnall II and Congal are primarily made up of warriors native to Ireland. However, Domnall I of Dál Riata brings a more varied force to the fight. His army included Scots, Picts, Anglo-Saxons, and Britons (Welshmen). At least one side has a substantial cavalry force.

There is reason to believe that the battle might have lasted a week, at the end of which the defeated force flees towards the woods of Killultagh. The forces of Ulster and Dál Riata are defeated, with Domnall of Dál Riata forced to flee north to his kingdom’s holdings. Congall is killed in the course of the battle.