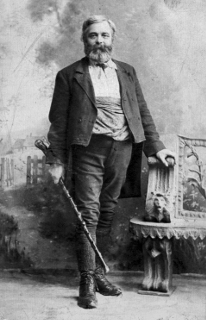 Michael Cusack, teacher and founder of the Gaelic Athletic Association, is born to Irish speaking parents on September 20, 1847 in the parish of Carran on the eastern fringe of the Burren, County Clare during the Great Famine.

Cusack becomes a national school teacher, and after teaching in various parts of Ireland becomes a professor in 1874 at Blackrock College, then known as the French College. In 1877, he establishes his own Civil Service Academy, Cusack’s Academy, in Dublin which proves successful in preparing pupils for the civil service examinations.

A romantic nationalist, Cusack is also “reputed” to have been associated with the Fenian movement. He is active in the Gaelic revival as a member of the Society for the Preservation of the Irish Language which is founded in 1876, and later the Conradh na Gaeilge who in 1879 breaks away from the Society. Also in 1879, he meets Pat Nally, who is a member of the Irish Republican Brotherhood and a leading nationalist and athlete. He finds that Nally’s views on the influence of British landlordism on Irish athletics are the same as his. He recalls how both Nally and himself while walking through the Phoenix Park in Dublin seeing only a handful of people playing sports in the park so depressed them that they agreed it was time to “make an effort to preserve the physical strength of [their] race.” Nally organises a National Athletics Sports meeting in County Mayo in September 1879 which is a success, with Cusack organising a similar event which is open to ‘artisans’ in Dublin the following April.

The Gaelic Athletic Association (GAA) is founded on November 1, 1884, by a group of Irishmen gathered in the billiard room of the Hayes’ Hotel in Thurles, County Tipperary. The architects and founding members are Michael Cusack of County Clare, Maurice Davin, Joseph K. Bracken, Thomas St. George McCarthy, P.J. Ryan of Tipperary, John Wyse Power, and John McKay. Their goal is to to formulate a plan and establish an organisation to foster and preserve Ireland’s unique games and athletic pastimes.

The GAA focuses primarily on promoting Gaelic games, which include the traditional Irish sports of hurling, camogie, Gaelic football, handball, and rounders. The Association also promotes Irish music and dance, as well as the Irish language.

Gaelic football and hurling are the most popular activities promoted by the organisation, and the most popular sports in the Republic of Ireland in terms of attendances. Gaelic football is also the largest participation sport in Northern Ireland. GAA competitions, activities, and structures are organised on an all-Ireland basis, without reference to the border drawn in 1921. The women’s version of these games, ladies’ Gaelic football and camogie, are organised by the independent but closely linked Ladies’ Gaelic Football Association and the Camogie Association respectively. GAA Handball is the Irish governing body for the sport of handball, while the other Gaelic sport, rounders, is managed by the GAA Rounders National Council.

Since its foundation in the late 19th century, the Association has grown to become a major influence in Irish sporting and cultural life with considerable reach into communities throughout Ireland and among the Irish diaspora.