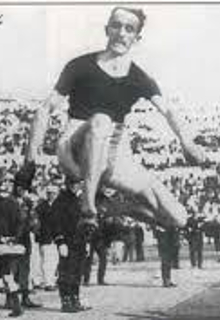 Born in Millom, Cumberland, England on October 24, 1872, O’Connor grows up in Wicklow, County Wicklow. He joins the Gaelic Athletic Association (GAA) in 1896. In 1899 he wins All-Ireland medals in long jump, high jump and hop, step and jump (triple jump). Over the next ten years he consistently beats British athletes in international competitions. The Amateur Athletic Association of England invites him to represent Britain in the 1900 Summer Olympics but he refused as he only wishes to represent Ireland.

As of June 1900, the world record for the long jump is held by Myer Prinstein of Syracuse University, at 24′ 7-1/4″. In 1900 and 1901, competing with the Irish Amateur Athletic Association (IAAA), a rival association to the GAA, O’Connor sets several unofficial world records in the long jump. He sets an officially recognised world record of 24′ 9″ at the Royal Dublin Society’s grounds in Dublin on May 27, 1901. On August 5, 1901 he jumps 24′ 11-3/4″ in Dublin. This is the first IAAF-recognised long jump world record. It causes a sensation at the time, being only a fraction short of the 25-foot barrier, and remains unbeaten for 20 years, a longevity surpassed only by Jesse Owens‘s 25-year record and Bob Beamon‘s 23-year record. It remains an Irish record for a remarkable 89 years.

In 1906 O’Connor and two other athletes, Con Leahy and John Daly, are entered for the Intercalated Games in Athens by the IAAA and GAA, representing Ireland. However, the rules of the games are changed so that only athletes nominated by National Olympic Committees are eligible. Ireland does not have an Olympic Committee, and the British Olympic Council claims the three. On registering for the Games, O’Connor and his fellow athletes find that they are listed as Great Britain, not Irish, team members.

In the long jump competition, O’Connor finally meets Myer Prinstein of the Irish American Athletic Club who is competing for the U.S. team and whose world record O’Connor had broken five years previously. The only judge for the competition is Matthew Halpin, who is manager of the American team. O’Connor protests, fearing bias, but is overruled. He continues to protest Halpin’s decisions through the remainder of the competition. When the distances are announced at the end of the competition, Prinstein is declared the winner, with O’Connor in Silver Medal position.

At the flag-raising ceremony, in protest of the flying of the Union Flag for his second place, O’Connor scales a flagpole in the middle of the field and waves the Irish flag, while the pole is guarded by Con Leahy.

In the hop, step and jump competition two days later, O’Connor beats his fellow countryman, Con Leahy, to win the Gold Medal. At 34 he is the oldest ever Gold Medal winner in this event. Prinstein, the champion in 1900 and 1904, did not medal.

O’Connor wins no more titles after 1906. He remains involved in athletics all his life. He is a founder member and first Vice-President of Waterford Athletic Club, and attends later Olympics both as judge and spectator. He practises as a solicitor in Waterford and is married with nine children. He dies in Waterford on November 9, 1957. 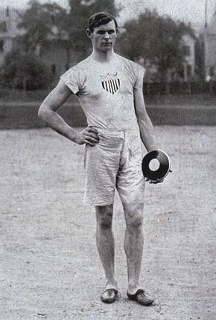 Martin John Sheridan, “one of the greatest athletes the United States has ever known” according to his obituary in The New York Times, dies in St. Vincent’s Hospital in Manhattan, New York City on March 27, 1918, the day before his 37th birthday.

Sheridan is born in Bohola, County Mayo on March 28, 1881. At 6’3″ and 194 lbs., Sheridan is the best all-around athlete of the Irish American Athletic Club, and like many of his teammates, serves with the New York City Police Department from 1906 until his death. He is so well respected in the NYPD, that he serves as the Governor’s personal bodyguard when the governor is in New York City.

A five-time Olympic gold medalist, with a total of nine Olympic medals, Sheridan is called “one of the greatest figures that ever represented this country in international sport, as well as being one of the most popular who ever attained the championship honor.” He wins the discus throw event at the 1904, 1906, and 1908 Summer Olympic Games as well as the shot put at the 1906 Olympics and the Greek discus in 1908. At the 1906 Intercalated Games in Athens, Greece he also wins silver medals in the standing high jump, standing long jump and the stone throw.

Two of Sheridan’s gold medals from the 1904 Summer Olympic Games in St. Louis, Missouri and one of his medals from the 1906 Intercalated Games in Athens, Greece, are currently located in the USA Track & Field‘s Hall of Fame History Gallery, in Washington Heights, Manhattan.

There are claims that Sheridan fuels a controversy in London in 1908, when flagbearer Ralph Rose refuses to dip the flag to King Edward VII. Sheridan supports Rose by explaining “This flag dips to no earthly king,” and it is claimed that his statement exemplifies both Irish and American defiance of the British monarchy. However, careful research has shown that this is first reported in 1952. Sheridan himself makes no mention of it in his published reports on the Games and neither does his obituary.

Martin Sheridan dies in Manhattan, New York City on March 27, 1918, a very early casualty of the 1918 flu pandemic. He is buried in Calvary Cemetery, Queens, New York. The inscription on the granite Celtic Cross monument marking his grave says in part: “Devoted to the Institutions of his Country, and the Ideals and Aspirations of his Race. Athlete. Patriot.” He is part of a group of Irish American athletes known as the “Irish Whales.”