Michael Kelly Lawler, a volunteer militia soldier in the Black Hawk War (1831–32), an officer in the United States Army in both the Mexican–American War and the American Civil War, is born on November 16, 1814, in Monasterevin, County Kildare. As a brigadier general in the American Civil War, he commands a brigade of infantry in the Western Theater and serves in several battles.

Born to John Lawler and Elizabeth Kelly, they move to the United States four years later and settle initially in Frederick County, Maryland. In 1819, they move to rural Gallatin County, Illinois. On December 20, 1837 Lawler marries Elizabeth Crenshaw. He receives an appointment as a captain in the Mexican-American War and commands two companies in separate deployments to Mexico. He first leads a company from Shawneetown, Illinois that guards the supply route from Veracruz to General Winfield Scott‘s army. After the fall of Veracruz his company is discharged. He makes a visit to Washington after which he is asked by Illinois Governor Thomas Ford to organize a company of riflemen. He serves in the campaign to take Matamoros, Tamaulipas.

Lawler then returns to his farm in Illinois, where he is residing at the outbreak of the American Civil War. He establishes a thriving mercantile business, dealing in hardware, dry goods, and shoes. He studies law, passes his bar exam, and uses his legal license to help the claims of Mexican War veterans.

In May 1861 Lawler recruits the 18th Illinois Volunteer Infantry Regiment, and is appointed as its first colonel. His time in command of the regiment in Kentucky and Tennessee is controversial and an “ordeal.” He is wounded during the Battle of Fort Donelson. In November 1862 he is commissioned as a brigadier general, and commands a brigade in the Second Division of the XIII Corps. He fights with distinction in the Vicksburg campaign in 1863. He leads his men in the battles of Port Gibson, Champion Hill, Big Black River Bridge, and the May 22, 1863 general assault on Vicksburg, Mississippi, where troops under his command are the only Union forces to enter the Confederate works at the Railroad Redoubt where they plant the United States flag.

Following the surrender of Jackson, Mississippi, the XIII Corps is split up and divided among other operations in the Western Theater. For the rest of the war, Lawler serves as commander of the 1st Division, XIII Corps in Louisiana in the Department of the Gulf, taking command of the division during the disastrous Red River campaign and leading it on an expedition in June 1864 to secure a crossing of the Atchafalaya River used by Confederate forces.

In the omnibus promotions at the end of the American Civil War, Lawler receives a promotion for distinguished service to major general in the Union army backdated from March 13, 1865. After mustering out of the army in 1866, he returns home and resumes his legal practice and farming near Shawneetown, Illinois.

Lawler dies in Shawneetown on July 22, 1882 and is buried in the Lawler Family Cemetery near Equality, Illinois, at the rear of the Old Slave House property.

A memorial to Lawler stands in Equality, Illinois. He also is honored with a marble bust in Vicksburg National Military Park in Vicksburg, Mississippi. Chicago renames a street to Lawler Avenue in his memory. 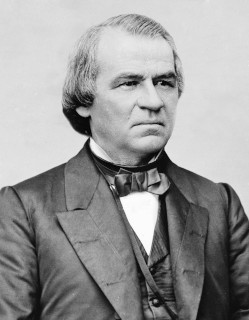 Andrew Johnson, the 17th President of the United States (1865 – 1869), dies on July 31, 1875 at his daughter Mary’s farm near Elizabethton, Tennessee after suffering two strokes.

Johnson assumes the presidency at the time of the assassination of Abraham Lincoln as he is Lincoln’s Vice President. He is a Democrat who runs with Lincoln on the National Union ticket, coming to office as the American Civil War concludes. He favors quick restoration of the seceded states to the Union without protection for the former slaves. This leads to conflict with the Republican-dominated Congress, culminating in his impeachment by the House of Representatives in 1868. He is acquitted in the Senate by one vote. His main accomplishment as president is the Alaska Purchase.

Johnson is born in poverty in Raleigh, North Carolina on December 29, 1808. His grandfather emigrated to the United States from County Antrim in what is now Northern Ireland. He never attends school and is apprenticed as a tailor and works in several frontier towns before settling in Greeneville, Tennessee. He serves as alderman and mayor there before being elected to the Tennessee House of Representatives in 1835. After brief service in the Tennessee Senate, he is elected to the U.S. House of Representatives in 1843, where he serves five two-year terms.

On October 17, 1853, Johnson becomes the 15th Governor of Tennessee serving for four years until November 3, 1857. He is elected by the legislature to the United States Senate on October 8, 1857. During his congressional service, he seeks passage of the Homestead Act of 1862 which is enacted soon after he leaves his Senate seat in 1862.

Southern slave states secede to form the Confederate States of America, which includes Tennessee, but Johnson remains firmly with the Union. He is the only sitting senator from a Confederate state who does not resign his seat upon learning of his state’s secession. In 1862, Lincoln appoints him as military governor of Tennessee after most of it has been retaken. In 1864, he is a logical choice as running mate for Lincoln, who wishes to send a message of national unity in his re-election campaign. Their ticket easily wins the election. He is sworn in as Vice President on March 4, 1865. He gives a rambling speech, after which he secludes himself to avoid public ridicule. Six weeks later, the assassination of Lincoln elevates him to the presidency.

Johnson implements his own form of Presidential Reconstruction, a series of proclamations directing the seceded states to hold conventions and elections to reform their civil governments. Southern states return many of their old leaders and pass Black Codes to deprive the freedmen of many civil liberties, but Congressional Republicans refuse to seat legislators from those states and advance legislation to overrule the Southern actions. Johnson vetoes their bills, and Congressional Republicans override him, setting a pattern for the remainder of his presidency.

Johnson opposes the Fourteenth Amendment which gives citizenship to former slaves. In 1866, he goes on an unprecedented national tour promoting his executive policies, seeking to break Republican opposition. As the conflict grows between the branches of government, Congress passes the Tenure of Office Act in 1867 restricting his ability to fire Cabinet officials. He persists in trying to dismiss Secretary of War Edwin Stanton, but ends up being impeached by the House of Representatives and narrowly avoiding conviction in the Senate. He does not win the 1868 Democratic presidential nomination and leaves office the following year.

Johnson returns to Tennessee after his presidency and gains some vindication when he is elected to the Senate in 1875, making him the only former president to serve in the Senate. In late July 1875, convinced some of his opponents are defaming him in the Ohio gubernatorial race, he decides to travel there to give speeches. He begins the trip on July 28, and breaks the journey at his daughter Mary’s farm near Elizabethton, where his daughter Martha is also staying. That evening he suffers a stroke but refuses medical treatment until the following day. When he does not improve two doctors are sent for from Elizabethton. He seems to respond to their ministrations, but suffers another stroke on the evening of July 30 and dies early the following morning at the age of 66.

President Ulysses S. Grant has the “painful duty” of announcing the death of the only surviving past president. Northern newspapers, in their obituaries, tend to focus on Johnson’s loyalty during the war, while Southern ones pay tribute to his actions as president. Johnson’s funeral is held on August 3 in Greeneville. He is buried with his body wrapped in an American flag and a copy of the U.S. Constitution placed under his head, according to his wishes. The burial ground is dedicated as the Andrew Johnson National Cemetery in 1906 and, with his home and tailor’s shop, is part of the Andrew Johnson National Historic Site.

The Irish government declares a National Day of Mourning on September 14, 2001. Schools, businesses, and shops are shut down in an unprecedented gesture of sympathy following the attack on the World Trade Center in New York City three days earlier.

Thousands of people queue for hours in front of the United States Embassy in Ballsbridge, Dublin, waiting patiently to sign one of the many books of condolences to be presented to the U.S. government in the aftermath of the attack. At John F. Kennedy’s ancestral home in Dunganstown, County Wexford, the U.S. flag flies at half-mast and the house is closed to visitors.

As it was on the day that Kennedy was assassinated, everyone remembers where they were on September 11. But on September 14 in Ireland, the churches are full and the offices, shops and pubs dark and silent as the country mourns with its American relatives, colleagues and friends.

Bouquets of flowers, teddy bears, candles and messages are left at the Embassy, as thousands stand with heads bowed. The building’s facade is turned into a shrine to those who died in New York, Washington, D.C. and Pennsylvania. There are both tears and applause when 250 firefighters from all over Ireland parade past the Embassy as a mark of respect to the hundreds of firefighters lost in New York. People weep openly as they hear of the casualties and more details emerge of that terrible morning.

The nation prays as industrial and commercial life comes to a halt and offices, government departments and all places of entertainment close for mourning. In every parish and diocese religious services are held, with the biggest, an ecumenical service in Dublin, attended by Taoiseach Bertie Ahern, President Mary McAleese and many other cabinet members. At least 2,000 people attempt to squeeze into St. Mary’s Pro-Cathedral, which holds only 1,500. Outside, a group of U.S. students break into the American national anthem and the crowd falls silent.

The bells of Christ Church Cathedral ring muffled for 90 minutes to mark the occasion, and at 11:00 AM towns and villages fall silent as the people join in a European-wide three minutes of silence. At noon, all trains stop for five minutes and special services are held in practically every town in the country. In Bray, County Wicklow, so many people show up that the church runs out of communion. A number of people approaching the altar are given a blessing instead.

In Dublin’s universities in the months following the attacks, Irish students who were present in New York at the time are offered free counseling to help them deal with the “nightmares and flashbacks.”

A fund for the families of the victims started by Independent News and Media, which donates the money from the sales of all its newspapers on September 14, reaches more than 120,000 punts. It is given to The American Ireland Fund in the presence of U.S. Ambassador to Ireland, Richard Egan. Money is collected throughout the country for many months.

(From: “Ireland’s National Day of Mourning” by Irish America staff, http://www.irishamerica.com, December/January 2002 | Pictured: Taoisearch Bernie Ahern and Tanaiste Mary Harney with members of the Irish Cabinet sign the book of condolences in the U.S. Embassy in Dublin three days after the terrorist attacks)